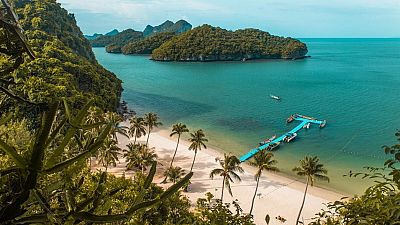 Our oceans are in serious trouble. Less than a fifth of plastic in the world today is recycled according to National Geographic. Recent reports show that around 18 billion pounds of plastic makes its way into them each year from coastal regions.

An American diver achieved the deepest dive in history to the Mariana Trench - some 6.8 miles below sea level - just a couple of months ago, only to find items such as sweet wrappers and a plastic bag floating around. It seems that even in the most remote corners of the world, man-made rubbish can be found.

At the moment - the prospect could seem bleak - particularly in some of the most popular tourist areas. Indonesia, Thailand and Vietnam remain some of our favourite holiday destinations but are three of the worst ocean polluters in the world according to Our World in Data. A lot of the problems stem from the fact that these are underdeveloped countries and they don’t have the infrastructure to cope with the staggering amounts of plastic waste. As a result, much of the waste that we, the tourists, are responsible for creating, ends up being dumped in the ocean.

Where once this may have been easy to brush aside, the problem is now impossible to ignore. Within just a few short years, the evidence of this waste can be seen everywhere. Shorelines are now littered with rubbish that the oceans are angrily spitting back out. More and more marine species are becoming endangered and our coral reefs are dying.

If you’re heading on a tropical holiday to one of these destinations, there are things you can do to help turn the tide of plastic pollution. From beach clean ups to eco dives, these are the initiatives you can get involved with on your next trip.

Bali is well known for its sunsets, Eden-like greenery and stunning waterfalls. It’s also developed a reputation in the past few years as being one of the largest ocean polluters in the world. Many of the most popular tourist spots are right on the beach, it’s little surprise that plenty of ocean waste coagulates there. Bali itself has only become a hugely popular destination in the last couple of years - development changes can be seen in the most visitor populated areas each week. New hotels, restaurants and bars are being developed all the time and the island doesn’t yet have the infrastructure to cope with such demands.

If you’re heading to Indonesian island, there are plenty of ways you can help lower your own impact. Areas such as Canggu - a surfer and digital nomad paradise - hosts several beach cleaning projects. One Island One Voice hosts a mass cleanup across the island each February, this year joining together 45,000 volunteers to collect over 30 tons of plastic. Other initiatives such as Ocean Mimic hosts weekly cleanups.

Thailand’s islands, such as Koh Phi Phi, Koh Phangan and Koh Tao have been a long-time favourite destination of travellers and holiday makers in search of white sand beaches and azure blue sea. Despite suffering a devastating Tsunami back in 2004, the area has continued to welcome an influx of visitors and has struggled to keep up. It’s not uncommon now to go on a dive in the area and see as much plastic floating through the water as you do marine life. If you’re heading to Koh Life, make sure to check out the Adang Sea Diver’s Trash Hero project, which meets every Monday to help clean the beaches. On Koh Tao, be sure to look up Eco Koh Tao, which runs reef cleaning diving trips.

As one of the world’s five worst polluters, Vietnam releases around 13 million tons of plastic into the oceans each year. With over 2,000 miles of coastline, attracts a lot of visitors to its idyllic beaches. Lined with palm trees and boasting pure white sand, they’re a pull for all sorts of travellers, from enthusiastic divers to those who just like to fly and flop. There’s a beach to suit every time of holiday maker here - quiet coves and expansive stretches - each with its own beautiful view and stunning wildlife. Of course, thanks to the pollution problem, many of these spots have been marred by plastic which sits on the beaches and floats on the water.

Do your part by joining in with Clean Up Vietnam - an NGO that hosts regular cleaning initiatives and community projects and welcomes temporary visitors into the fold. Find out more about what they do here.