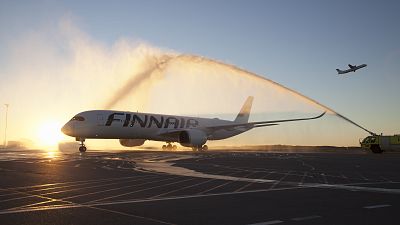 Finnair has flown its first biofuel flights backed by its ‘Push for Change’ carbon cutting initiative this week.

The move came as one of the final pushes as Finnair aims to cut its CO2 emissions per kilometre flown by 17% between 2013 and 2020.

On 5 and 7 August, the Finnair flight from San Francisco bound for Helsinki used a biofuel mix of 12%. The move would reduce CO2 output by 16 tonnes per flight, said the airline. Biofuel has the capacity reduce emissions by 60–80 % when compared to the same amount of fossil fuel.

The sustainable biofuel is provided by SkyNRG and World Energy and made from used cooking oil in California. The carrier confirmed the choice meant its fuel needs wouldn’t compete with food production or the agriculture industry.

“The launch of our Push for Change initiative was an important step for Finnair in order to provide our customers with the opportunity to conveniently offset or decrease the emissions from their travel,” said Finnair’s senior vice president for communications and corporate responsibility, Arja Suominen.

Finnair had previously launched biofuel flights between Amsterdam and Helsinki in 2011, with a 50/50 mix of biofuel made from waste vegetable oil and conventional jet fuel.

Lufthansa, KLM, Thomson Airways and Singapore Airlines are among the other big names to have trialled various biofuels.

“We have been pleased with the early phases of the initiative so far and we are now excited to move forward and fly our two first biofuel flights supported entirely by the Push for Change contributions,” added Suominen.

Finnair’s Push for Change scheme also offers travellers the option to offset their carbon emissions, as well as purchasing biofuel for future flights, as it is currently three to five times as expensive as traditional fuel, according to the company.

It has also invested in a new fleet of fuel-efficient Airbus A350 aircraft that generate 25% less emissions than the previous generation, as well as reducing weight taken on board.