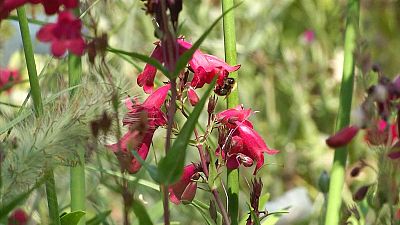 The garden has become a haven for endangered butterflies and bumblebees   -   Copyright  AP
By Rachel Graham  •  Updated: 25/07/2019

This summer’s intense heat has left scorched grass and wilting flowers in its wake throughout Europe. It was a similar story last year, when crops failed after water reserves dried up.

But there is an exception. Nestled away in Colchester, just outside London, there is a garden that hasn’t been watered in almost 30 years, and it is blooming despite the heatwave.

None of the plants in the late Beth Chatto’s dry garden have been fed since it was created in 1992. Now, they simply survive on rainwater.

It’s been a steep learning curve, according to head gardener on the project, Åsa Gregers-Warg. Given the advent of more extreme weather conditions with unpredictable seasons, it is becoming more important to think carefully about how water is used in gardening, she says.

"This actually used to be a car park for many years," explains Gregers-Warg.

“And Beth Chatto always used to say that even the native weeds would curl up and die in July. It was that dry. But she knew that if she just chose the right plants that could cope with his conditions she could create something really beautiful.”

It has paid off, with the garden continuing to blossom in the face of record temperatures. It even survived 50 days without a drop of rain last year, and all while those in charge refuse to compromise on aesthetics.

Hit play on the video at the top of the page for more information.

A guide to surviving the heatwave without humiliating yourself