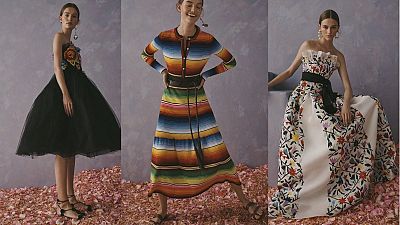 Carolina Herrera has come in for a storm of criticism after a Mexican government minister accused the veteran designer of cultural appropriation.

In a letter addressed to Venezuelan-born Herrera and the brand’s creative director Wes Gordon, minister Alejandra Frausto demanded the fashion house “publicly explain on what basis it decided to make use of these cultural elements, whose origins are documented, and how this benefits the Mexican communities”.

The collection in question is “about visceral reactions of delight-eclectic patterns”, according to the Carolina Herrera website. It certainly provoked visceral reactions, with commentators divided over the issue and taking to social media to express their outrage.

Some sided with the Mexican government, with user Venus saying some designs made her “uncomfortable” because they “clearly made use of some of our countries most representative artisan embroidery and designs from Hidalgo, Jalisco, Oaxaca”.

The user went on to point out that this was not the first time designers had replicated traditional designs “without giving the appropriate credit that is due”. She called out design houses Michael Kors, Intropia and Isabel Marant as well as high street brands Mango and Zara for “copying” traditional Mexican craftsmanship in their designs, while failing to attribute or compensate original creators.

Other users conceded some pieces were inspired by Latin designs and saw no issue with the brand’s use of indigenous cultures designs. However, many took umbrage with the fact all the models chosen to exhibit the collection were white, and failed to represent of recompense those it had “ripped off”.

Loving the fact Carolina Herrera got inspired by my culture. Hating the fact none of the profits not even a slight bit will go to mexican indigenous people she ripped off the embroidery from and none of the models wearing these are poc. Um where’s the diversity ma’am? pic.twitter.com/lPpa5WmGZH

Meanwhile, other commentators defended the designer’s right to use patterning and silhouettes inspired by world culture. Attacking the trend of calling out cultural appropriation, Twitter user Guillermo Parra questioned the difference between Herrera adopting traditional Mexican designs and eating tacos.

In a statement issued to the AP, the brand said it recognised “the wonderful and diverse craft and textile work of Mexican artisans” and that the collection is inspired “by the culture’s rich colors and artisanal techniques”.

This old school bus has been converted into a tiny home

What is guerrilla gardening and how does it help the climate?

Tokyo 2020 Olympic beds: Suitable for both sex and saving the planet

Bug burgers and beetle beer: What is the future of edible insects?