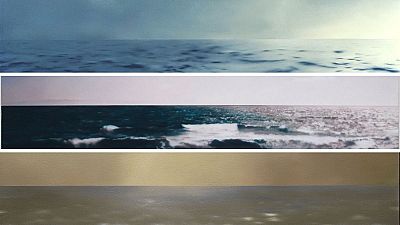 Modern trends are predominantly driven by social media through popular hashtags, shared media, and online conversation. Prominent topics, events and pivotal moments can rarely be missed the second you’re confronted with your newsfeed. Much like Earth Day, World Oceans Day is a great way to raise awareness around climate change, and a momentous occasion that we too like to be a part of. In the name of World Oceans Day this year, we checked out Gerhard Richter’s exhibit; Seascapes at the Guggenheim Museum in Bilbao, Spain.

Seeking to create the perfect image, German-born artist Gerhard Richter created a series of ‘seascapes’ in different formats, colours and styles. Dominating each piece in the three-decade long collection, signature grey stuck with him throughout his career. Open to interpretation, when looking at each seascape, his work can be seen as either a controversy or clarity of the seas. In some cases, the horizon can barely be defined to those in which the realism of the sky is only distinguished by an ambiguous light.

Embellishing the landscape in his quest for perfection; in some works, the sky and the sea actually derive from two different images that Richter has fused together, leaving the viewer to depict the meaning behind the image. Gerhard mostly occupies much of the canvas with skies, which are occasionally eclipsed by the sea. Unlike most of his kind, Richter uses a spatula to make flat clouds, creating a smooth surface by applying highly diluted pigment and then blurring the image for a final touch. At first glance, the paintings appear as photographs, however, at a closer view, the details become abstract.

Giving the ocean a voice

In his first work, entitled Seascape (Seestuck) from 1968, the small oil canvas displays an infinite horizon what then looks like white foam as the paint becomes thicker, revealing Richter’s brushstroke. In this instance, the work could be interpreted as a desert landscape, whereas the title tells us we’re seeing the ocean.

While in a later piece of work, Seascape (Wave) two-thirds of the canvas is covered with a stormy sky in varied shades of grey, and light emerges amidst the clouds as if it were a display of emotions. Illustrating a voice of the Earth perhaps?

What is World Oceans Day?

Today, more than ever, our oceans need to be protected. Recklessness has left our seas at high risk, not to mention the wildlife that resides in it. World Oceans Day is out to help promote the future of the planet’s seas. Referred to as the lungs of the Earth, the purpose is to develop a worldwide movement to protect and manage the world’s oceans. Providing most of the oxygen we breathe, they’re a critical part of the biosphere and World Oceans Day is a celebration of the beauty, wealth and promise of the ocean.

Amidst a current climate emergency, some may interpret Richter’s work as a display of the turbulent times our planet is confronted with. Amongst moody skies and chopping waves, the images unveil the danger our seas face married with the beauty that lies within them.

Gerhard Richter: Seascapes is currently being held at the Guggenheim Museum Bilbao until September 9th 2019.