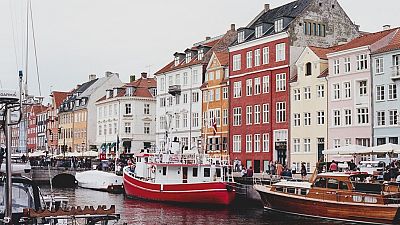 Copenhagen is pretty much the cycling capital of Europe, so if you’re planning to get on a set of wheels during your next trip, the city is extremely well set up for it. In fact - in 2017 it was found that the morning traffic is made up of more cyclists than motorists. A pretty impressive eco-friendly credential, if you ask us. There’s an extensive network of cycle lanes- around 300 kilometres, in fact - and the city is blissfully flat, making it the perfect place to visit for keen cyclists.

As cycling is one of the most popular forms of transportation, rush hour is, understandably, somewhat manic. Nervous cyclists would do well to avoid these early morning and late afternoon hours if they don’t feel confident enough to deal with the crowds.

Considering the amount of cyclists around and despite the ample number of bike parks, there never seems to be enough so always make sure to take your bike lock with you, in case you need to secure it to a fence, lamppost or something of a similar ilk.

The golden rule for cycling round Copenhagen is to always stay to the right of the cycle path - they work in the same way that the roads do and as you’re likely to be moving at a slower pace than the speedy commuter, it’s best to stay out of the way.

Explore your adventurous side and head out on your own adventure with our tailor-made guide to cycling the sights of the city centre.

● As there are plenty of cycle paths, biking is a great way to take in the sites of Copenhagen for both adults and children. Start the day off at the Little Mermaid statue - the lonely looking bronze figurine of the moment she turns from mermaid to human. This was created by Edvard Eriksen, in honour of the famous Danish author, Hans Christian Andersen - the man responsible for many of the much-loved fairytales we’re familiar with today.

● From there, cycle down to Sortedam Dossering, which is the lake closest to Østerbrogade - a pretty little place to stop for breakfast in one of the lakeside coffee shops.

● Once you’ve had your morning caffeine hit, you should set off down the Sortedam Dossering, taking in the pretty view of the lake Peblingesøen on your way.

● Take a right down Gothersgade and follow the road all the way to Nyhavn - the famous canal surrounded by a rainbow of brightly painted houses and fishing boats. This is the spot to take some of the best pictures and stop for a drink.

● It’s a quick and easy route along Holbergsgade to the Christiansborg Palace - the one time residence of the Danish royal family but now home to the Danish parliament.

● After that, make your way to the Tivoli Gardens - Copenhagen’s famous amusement park that’ll prove the perfect stop for kids. If you don’t fancy going on the rides, it lives up to its name as there are also some beautifully manicured gardens to enjoy.

● For the best views of the city, cycle over to the Round Tower, which is the oldest observatory deck in Europe and one of the most beautiful.

● Finish the day at Strøget Street, which offers over 1 kilometre of designer and high street shops to explore.

If you don’t want to worry about planning your own route, there are plenty of organised bike tours you can book on to, allowing you to focus on taking in the sights of the city. Copenhagen Small Bike Tour from Nova Fairy Tales has won a lot of fans thanks to its exciting route and knowledgeable guides. Taking in the famous sites as well as several hidden gems, the group sizes are limited to 10 people, so you’ll never feel lost in a crowd or have to worry about not being able to hear the guide. Another favourite is the Urban Bike Tours. There are three options to choose from here - you can try out the Map Ticker Tour if you’re comfortable with cycling 20km and want to take in all the sights. The Stroll is for when you want an easier ride, taking you 18km through some of the city’s prettiest parks and ending at a beach bar, then there’s the Bike Lanes and Bridges tour, which does exactly what it says on the tin and is the longest at 25km.

Bike trips are made easy with Bike & Stay, which offers several route maps, gives tips on places to stay and the sights you should take in when cycling around - the best part is, it’s available offline too. Another excellent route app, I Bike CPH will help you navigate the crowds of Copenhagen, offer the best shortcuts and take you to see all the best landmark, allowing you to sit back and enjoy the ride.

Lastly, if you’re looking to use the self-service bikes available throughout the city, download Donkey Republic - it lets you rent a bike through your mobile, pick it up from the nearest bike park and rent it for as long as they like. The only difference between this system and the London one is that you have to return the bike to the original parking spot.

Modern, minimalist and family-run, Hotel Kong Arthur is a boutique hotel tucked between the city centre and the famous canals. It’s been Green Key certified, meaning it’s met the highest standard for environmental and sustainable operations. There’s also an organic menu in the restaurant and a Balinese inspired spa to dip into after a long day of cycling.

Named the world’s most sustainable restaurant, Michelin-starred Relæ focuses on creating simple, locally and ethically sourced dishes. Everything from the ingredients to the packaging and cleaning has been is environmentally sustainable. With an elegantly industrial decor and animated atmosphere, it’s a must for any serious food lovers visiting Denmark’s capital city.

To find out more, head to the Visit Copenhagen website

More Cycling Guides: take to the saddle and bike around Amsterdam and Lisbon.