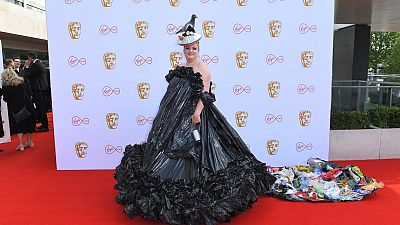 On the whole, the TV stars dressed to impress in sheer gowns and sharp suits. The three award-winning women from Killing Eve turned heads in their outfits, with Jodie Comer in a deep pink, off the shoulder dress and Waller Bridge in a duck egg blue gown by A Teodoro with cape sleeves.

But one actress, known for having written British TV series This Country, turned up in something quite different. Daisy May Cooper made an entrance on the red carpet dressed as a walking bin bag, with a matching dustbin lid feat. pigeon headpiece. Rubbish spilled out of the train of her dress, with plastic bottles and mouldy packaging trailing behind the sixteen litre bin bag as she walked.

Presumed to be a public bid drawing attention to the amount of waste we dispose of annually, given there are so many families in the UK relying on food banks, Cooper said that she made the dress herself with her mother. Subsequently, she donated the money she would have spent on a gown to her local food bank.

Critics may be calling it a mere PR stunt but, to us, anything that incites a conversation around waste and sustainable living is certainly a step in the right direction.