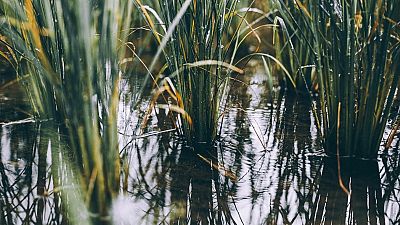 Once the preserve of Chinese emperors, Zizania Latifolia aka Wild Rice of Mandchouria, is now extremely rare to find in its natural state. The wild rice variety available in our shops is neither wild, nor rice. It’s a hybrid grain: Zizania Aquatica, also called ‘the Caviar of Grains’, grown under regulated conditions, and machine harvested.

Foodies and eco-conscious gourmets who cherish organic wild rice for its nutty flavour, tend to mix a handful of it with white rice. This practice allows a little to go much further. Whichever way one looks at it, the distance travelled by wild-rice before it reaches our plates is at the heart of the problem. Wild-black-rice is cultivated on the other sides of the world, in the US mostly in Minnesota, Canada, or in Asia.

Here, we found a wild-rice crop with a very similar nutty taste grown much nearer home. Rice has never been a major crop in Europe, but paddy fields exist on the old continent.

The culture of rice has an important ecological significance in several Mediterranean countries such as Italy, France, Spain and also a little further inland in Romania. For one thing, rice fields are often found in zones long thought to be inhospitable, such as deltas of major rivers. As such, the industry is a major contributor to the economic development of numerous disadvantaged areas. In effect, it means that we can look closer to home when selecting our rice.

Caviar of grains, it may not be, but Red Rice, also referred to as Wild Rice is grown in the Camargue marshes without harming the environment. Red Rice is a relatively new variety to the market. In the Rhone Delta, rice was first cultivated under the influence of Italian and Spanish migrants. This unique regional production covers 18 000 hectares of which only under 10 per cent are cultivated under organic conditions. It has long been thought impossible to cultivate rice over several seasons without using pesticides. But forward thinking rice-farmers dug deep in ancestral practices to find a solution. Bernard Poujoul is one of them.

Every year for the past decade or so, in the Marais de Saint-Gilles, Bernard Poujoul tends to his organic rice paddy fields with the help of some unusual little workers. Inspired by Japanese farmer Takao Furuno, Bernard Poujol uses an ancestral eco-friendly method called Aigamo. This 500 years old tradition allows rice-farmers to raise ducks and rice simultaneously.

Aigamo consists of letting ducklings roam and grow free in paddy-fields. The little birds are very efficient from the outset. In-line formation, they paddle happily between rows feeding on weeds only. As they do so, they leave behind rice plants that grow stronger, having been oxygenated as the water lapped their roots.

At Canard des Rizieres, thousands of Mulards (not to be confused with Mallards) help out with the rice cycle from spring to September. If you wonder, as I did, why the birds don’t feed on the rice crops, it’s simply a question of taste. They seems to find the weeds tenderer and more palatable. Bernard Poujol who is very proud of his farming methods is now working towards establishing a bio-model which could be reproduced and exported.

From paddies to plates

Pay attention, here comes the science bit: wild red rice is a tasty, nutrient-rich food. It contains the highest nutritional value of all kinds of rice, high in fibre, minerals, vitamin B6, and is comprised of 77.5% carbohydrate, therefore an excellent source of energy. Wild rice contains 1.5 times as much protein as brown rice, it’s gluten-free and it has the lowest in calories of all rice.

In spite of its nutritional qualities, few European chefs have introduced wild rice to their repertoire. Pascal Aussignac, best known for his London restaurant, Le Club Gascon, offers an unusual recipe for Camargue Rice. This method doesn’t involve boiling the grains in water, but instead, Chef Aussignac simmers rice in red wine for maximum flavour. The result is a dramatic looking dish, black as caviar.