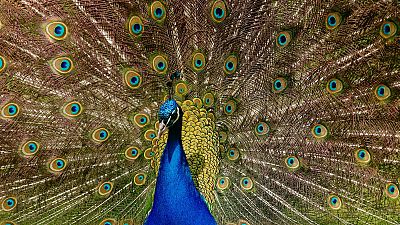 Looking for ways to engage with nature this month? These are the best wildlife events, trips and books to have on your radar in March 2019.

Wildlife Photographer of the Year Exhibition

The Wildlife Photographer of the Year exhibition has earned a formidable place in the world of nature photography thanks to its relevant topics and inclusive parameters, both of which add up to create a series of breathtaking shots year after year. Now in its 54th year, the Natural History Museum dedicates a wing to the winners each year, the space darkened to allow the photographs to shine (all of which are displayed on light panels). The 100 winners are chosen by expert judges from over 45,000 entries, meaning what you’ll see is truly the best of both amateur and professional photography.

Crete may not seem like an obvious choice when it comes to nature watching but as it has one of the most diverse flora profiles in all of Europe, it will certainly be an interesting one. This march, Naturetrek will be setting off on an eight day tour of the island and taking in some of its birds and botany along the way. As it sits right in one of the world’s most prominent bird migration routes, enthusiasts will have the opportunity to study large flocks as they make their way back to Europe for the summer. You’ll start in Plakias before making your way to the Imbros Gorge and orchid-covered countryside surrounding Spili. From there you’ll spend your last three nights in its former capital - Chania. Expect to see the Drooping Star of Bethlehem, Lammergeier and the Collared Flycatcher. Flights, accommodation and the majority of meals are included.

The Bee - A Natural History by Noah Wilson Rich

As the issues surrounding climate change become more pressing, our awareness of the importance of bees and their place in our ecosystem is increasing. Published on the 15th of March, Noah Wilson Rich’s dissection of their role in our lives proves particularly relevant and offers readers easily digestible information on myriad topics including the staggering variety, practical tips on beekeeping and how to keep them healthy. The text is punctuated by detailed illustrations and close up photography, allowing the reader to learn how to best identify bees, cultivate honey and prevent disease. Ideal for those who’ve ever considered investing in their own colony or just want to learn more about the species in general.

The BBC’s BAFTA award-winning nature documentary - presented by the incomparable David Attenborough - is being taken on the road for a series of viewings accompanied by a live orchestra. First aired in 2017, the documentary took over four years to film and is famous for its highlighting of the extent of oceanic plastic pollution, helping to kickstart a worldwide clean up. The series, when aired on television, was set apart by both its breathtaking footage of the deep blue and its musical accompaniment (which was composed by Hans Zimmer), which often expressed feeling that the images and words could not. There are thirteen stops around the UK and each of which will be hosted by Anita Rani.

The sad fact that a rhino is killed every 8 hours and an elephant is killed every 15 minutes in Africa remains true thanks to the illegal trade of ivory that still exists under the surface of this naturally abundant continent. In a bid to end the increasing threat of extinction that these animals face, Veterans For Wildlife is hosting their third annual golf day on the Woodmead Course in Johannesburg. The course, which features several tree-lined greens, is one of the best in the city and each team that joins the day will tee-off in the morning after some light refreshments, then recommence in the afternoon after breaking for lunch. Dinner will be served at the end of the day’s play and prizes will be on offer for all who attend.