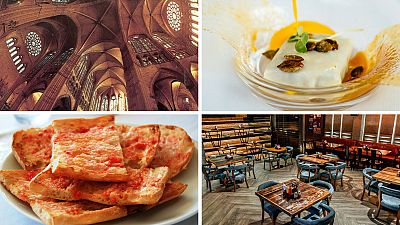 In northern Spain, the city of León has a rich history shaped by all the great religions and cultures that left their marks on Europe over the centuries. It emerged from the camp of the Roman Empire 7th Gemina Legion. Throughout the Middle Ages, it held a specific significance to the faithfuls, as an important step on the pilgrimage route to Santiago de Compostela.

But León is not just a melting pot of cultures or a place where the eye is caught by impressive architecture. It is also one of Spain’s greatest city to indulge in the pleasures of the table. In 2018, it was elected as the country’s gastronomic capital of the year. From friendly taverns to cosy tapas bar and creative restaurants that revisit the region’s culinary traditions, there has never been a better time to go on a gastronomic tour of the city.

The early morning is perhaps the best time of the day to admire the majestic cathedral that stands proudly in the centre of the old town, in the Barrio Romantico. You can sit outdoors in the large square, to begin the day with the typical spanish breakfast of Pan con tomate and cafe con leche (bread covered in tomato pulp and olive oil and a nice cup of coffee with milk). Coffee house El Reloj de La Catedral is ideally placed if you want to admire the grey facade of the cathedral come to life under the first rays of the sun, while sipping your hot drink.

Naturally, you are then drawn inside the building, to admire its gothic architecture and its colourful stained glass windows. Emerging out of its thick walls, a walk to the Basilica of San Isidoro allows you to discover the busy streets of León. Tourists and locals hurry along its pavement, under the midday sun. The Basilica itself is an impressive monument where visitors can see a collection of religious artifacts, including a precious golden goblet. This unique object has made the city famous in Europe, as some experts claim it might be Christ’s mythical chalice, used in the last supper.

Heading to Delirios & Tapas for lunch feels like a good option to recover from an intense morning of tourism. On the table, creative market cooking created by chef Javier Rodriguez Martinez awaits, with an option between three set menus: Delirios (19 euros), Degustacion (29 euros) and Gastronomico (39 euros). All can be paired up with an excellent wine selection.

This week, the ‘Gastronomico’ features creative snacks and starters, including a very surprising boletus-mushroom doughnut where the sweet glaze quickly gives way to the tangy feel of the mushrooms. The blue cheese macarons are particularly intense in flavour and savory. But perhaps the most delicate marriage of flavours comes from the fish course - the sea bass ceviche. The freshness of the fish is enhanced by a mix of cherries and bambu. Coming out of the restaurant, the stomach is full and the taste buds satisfied.

After a Spanish siesta (that after all, is part of the culture too), it’s time for a visit of the Casa Botines, a building signed by the genius architect Antoni Gaudi and inaugurated in 1893. This large house, which from the outside looks like a medieval fortress, first served as a business office and a residence. It is now a cultural centre where dramatised tours tell of its history, and that of the city.

It’s an interesting visit to do, to get back in shape before engaging in Spain’s favourite national sport: tapas. Eating those small and tasty dishes in León is a must, and the best neighbourhood to do that is the Barrio Humedo (‘wet neighbourhood’, so called for the high number of bars that pepper its streets).

Start at Los Cazurros on Plaza de San Martin, which offers local red wine - perfect to introduce you nicely to the region’s oenological culture. The drink mixes surprisingly well with the ‘zarapicu de bacalao’, a platter of potatoes and vegetables covered with cod fish and marinated in spices.

Right around the corner is a tiny bar called Entrepeñas, where it's customary to enjoy a plate of cold cuts, dried meat and chorizo from the region. The cecina, thin dried beef slices that are typical from León, is particularly rich in flavour.

The other ‘must-try’ is Bar Rebote, which has come to fame thanks to its croquetas (fried croquettes filled with bechamel and other ingredients). Perhaps the most authentic one is the croqueta de morcilla, filled with blood sausage, but the cheese croqueta will be much more satisfying to vegetarians.

For those who would rather try one of León’s fanciest restaurant, Cocinandos is the place to be. Awarded one Michelin star, it remains relatively reasonable regarding prices (45 euros for the set menu). With a single weekly menu, Chefs Yolanda León and Juanjo Pérez are creative in what they cook, while always making the flavours of León a crucial protagonist of the meals. Fresh local ingredients are selected and revisited with great care, to surprise the guests. Contact them beforehand, as tables can be booked months in advance.

A day in León wouldn’t be complete without sipping a cocktail on the Plaza Mayor, the huge square which comes alive as soon as the night falls. La Pañería, was once a shop selling cloth, which first opened in the 1920s. Fast forward a few decades, and it’s now one of the city’s best bar to start the night. Its mojitos are particularly elaborated, with the strawberry mojito being a personal favourite.

What a better way to end a gastronomic trip than with a visit to the local market? If you like immersing yourself in the authentic colours, smells and noises of a place, this is where you should be heading. If you end up buying cheeses sold by artisanal producers (including a delicious cured cheese with truffles) as well as the more typical cecina and beef chorizo, you are sure to take a piece of León home with you.