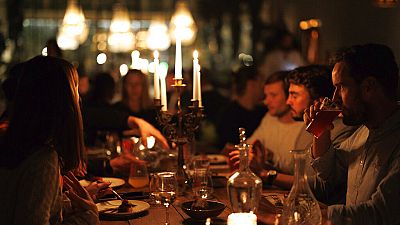 A group of diners have a drink and candle lit dinner at Brasserie Surrealiste in Brussels, Wednesday, Sept. 28, 2022.   -   Copyright  Olivier Matthys/Copyright 2022 The Associated Press. All rights reserved
By Euronews  with AP  •  Updated: 03/10/2022

As countries across Europe scramble to tackle soaring energy costs, some businesses are finding their own ingenious solutions.

In Brussels, the heart of the European Union, some restaurant owners are exploring what a future without gas and electricity could look like for diners - and their businesses.

Guests at Racines restaurant in the Belgium capital experienced a meal cooked and eaten in the total absence of modern creature comforts.

No ovens, no stoves, no hot plates, no coffee machines were used by employees of Racines to cook the food, while diners feasted under candlelight as light bulbs were switched off.

“The idea is to go back to the cave age,” said Francesco Cury, Racines owner. “We prepared a whole series of dishes that just need to be grilled for a few seconds, but the search for taste, for the amazing, for the stunning, is still part of our business.”

On the menu was brioche with anchovies, porchetta and focaccia cooked on a wood fire, raw white tuna, grilled pork with beans, and ricotta cream with pumpkin jam and pistachios for dessert.

Most were cold entrées, though some were slightly grilled over the flaming charcoal grill of a Japanese barbecue.

Some 50 guests took part in the dinner, which was organised last week as part of the “Brussels in the Dark” initiative involving a dozen of restaurants.

Despite the romantic atmosphere of the candle-lit tables, this one-time experience is actually what customers could face more permanently if energy bills keep increasing.

“People see price increases of 30% to 40% in the supermarket. And we, restaurant owners, buy the same raw material, the same products," said Cury. "So what do we do? We increase the prices. But then on top comes the price of gas and electricity. Can we do our job without energy sources? The answer is no."

“We have to think a little bit more, and society has to realise how critical the situation is," he added.

Inflation in the Eurozone hit a record high in September according to data published on Friday 30 September, as the fallout from the war in Ukraine continues to inflict a heavy toll on Europe's economies.

“We are at a point when one needs to choose between being warm at home or eating out," said Stephane Lepla, who was on a night out in Brussels with his girlfriend.

“Finding the balance is complicated. So yes, of course, there is a reflection on a daily basis," he says.

"There are habits that need to change, that we try to change anyway - even if it is not always easy.”