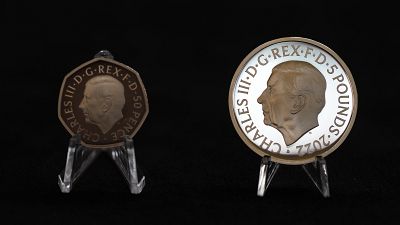 The official coinage portrait of King Charles III has been unveiled, following the end of the official period of mourning for his mother, Queen Elizabeth II.

According to the Royal Mint, who have been the UK's official maker coins for more than 1,100 years, the King's portrait will first appear on a special £5 Crown and 50 pence coin commemorating the life and legacy of the Queen.

The new monarch's depiction was created by British sculptor Martin Jennings, and has been personally approved by Charles.

“It is the smallest work I have created, but it is humbling to know it will be seen and held by people around the world for centuries to come," Jennings said.

In the portrait, the newly appointed King is without a crown and facing left.

A latin inscription surrounding his profile translates to “King Charles III, by the Grace of God, Defender of the Faith."

Britons will begin to see Charles’ image in their change from around December, as 50-pence coins depicting him gradually enter circulation.

Why is King Charles III facing to the left?

In keeping with tradition, the king's portrait faces to the left - the opposite direction to his mother's, Queen Elizabeth II.

"From the time of Charles II onwards, a tradition developed of monarchs being represented on the coinage facing in the opposite direction to their immediate predecessor," explains the official Royal website.

The only coinage that has deviated from this rule was that of Edward VIII, who insisted on having his likeness depicted facing left.

Who are the living heirs of Europe's abolished monarchies?

Why do the Brits love to patiently wait in line?

Netflix's The Crown skyrockets in popularity after the Queen's death