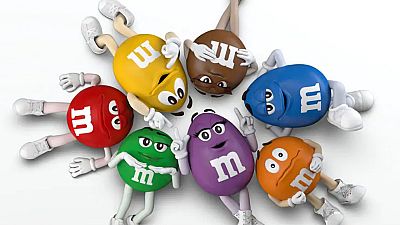 Mars, the producer of M&Ms, have introduced their first new character in a decade: Purple.

This comes after the company announced a “modern makeover” of their characters earlier this year, as part of a "global commitment to creating a world where everyone feels they belong and society is inclusive."

The new permanent addition to the team is the third female member of the M&Ms team alongside Green and Brown. But is the first female peanut M&M… If you’re the kind of snack-obsessed wunderkind who’s keeping track.

The character, voiced by comedian and talk show host Amber Ruffin, was introduced in the following YouTube video for her new song, ‘I’m just Gonna Be Me’.

What a time to be alive.

Not that this will change much for fans of the edible treats, mind you, as the colours will remain the same in the bags of chocolate-coated sweets: red, orange, blue, yellow, green and brown. Purple will only be present in the brand’s advertising campaigns.

Mars have said that Purple has been added as the brand's latest "spokescandy" and was “designed to represent acceptance and inclusivity.”

“Our newest member is known for her earnest self-expression,” the brand continued. “Keen self-awareness, authenticity and confidence are the driving forces behind Purple's charm and quirky nature."

"There is so much about our new spokescandy that people can relate to and appreciate, including her willingness to embrace her true self. Our new character reminds us to celebrate what makes us unique," Jane Hwang, global vice president at Mars Wrigley, stated.

Why should we care?

A very fair line of inquiry.

Well, if your eyes have been rolling so hard they’ve done a full 180° at those comments from Mars Wrigley and you can’t quite wrap your head around the thought of candy being a) a “spokescandy” and b) a nightmarishly anthropomorphized beacon of light for acceptance and inclusivity, perhaps you can take some solace in the fact that Mars Wrigley is adding the tune from the music video above to all major music platforms.

For every stream, a $1 donation (up to $500,000) will be made to Sing for Hope - "a non-profit that harnesses the power of the arts to bring hope, connection and purpose to millions of people around the world through music."

That’s something: a meaningful initiative, as opposed to the aesthetic rebranding made earlier this year, which saw M&Ms changing the footwear of the female Green character in a bid to be more “progressive”.

Because everyone knows that it’s not about personality – it’s about shoes.

The move, which no one asked for from the multinational conglomerate, remains a transparent bid to pass off marketing tactics as somehow meaningful. Worse, the company seemed to perpetuate stereotypes about women: the new runners were supposed to reflect "effortless confidence", which apparently no woman in high-heeled boots can aspire to.

And this week’s news doesn’t feel that far removed.

Still, it will be fun to watch Fox News pundits like Tucker Carlson go off on another rant about the “liberal woke agenda”, especially in the aftermath of his tirade earlier this year in which he condemned the changes made to Green because they made the character “less sexy.” Indeed, the unhinged news anchor stated that “M&M’s will not be satisfied until every last cartoon character is deeply unappealing and totally androgynous. Until the moment you wouldn’t want to have a drink with any one of them. That’s the goal.”

Yes, that was Tucker Carlson bemoaning the fact that he won’t get to take an M&M out for a drink and God knows what else.

And all cynicism aside, the push for inclusivity and desexualizing mascots that had no business being sexualized in the first place is only a good thing. So is taking a stand on social issues, and rebranding can help - especially when it comes to more body-positive Barbie dolls and less offensive logos, like when the Aunt Jemima brand removed their image based on a racial stereotype.

Millennials and Generation Z expect brands to be clear about their values and more and more consumers expect brands to take a meaningful stance in social conversations. It’s a knotty issue for companies, which will always risk backlash for any socially-driven campaigns that may be perceived as opportunistic or empty solidarity in the quest for profit.

The introduction of the new M&Ms character Purple doesn’t feel as tone-deaf as the Pepsi commercial by any stretch of the imagination, but nor is it particularly meaningful in terms of inclusivity, as Mars would like to have you believe.

Nor is Purple on par with more effective brand stands, like Bodyform’s 2020 campaign to highlight the “unspoken” truths about female experiences with endometriosis and first periods, or Tommy Hilfiger’s partnership with learning platform FutureLearn to offer free digital learning courses covering topics such as community building and LGBTQ+ allyship.

In fact, Purple feels more like a shameless push to pander to younger audiences under the guise of progress.

The consolation is that money is going to a good cause this time, and let’s face facts: while no one in their right minds would look towards chocolate for guidance on topics like inclusivity in the modern world, M&Ms are doing a damn sight better than most films, series and festivals in terms of gender representation.

At least chats amongst the anthropomorphised sweeties could potentially pass the Bechdel Test.

The story behind 'Baci': Europe's most romantic chocolate turns 100