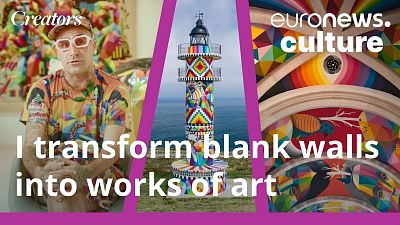 His distinctive style has made him one of the most recognisable urban artists in the world.

Summing up his artistic mission in a nutshell, Okuda told Euronews Culture: "What I do is transform grey cement into spaces with colour."

Today his work is developed from a studio in Madrid by a team of 25 people and can be found in all sorts of locations across the globe, from prominent galleries to public sculptures or immense, multi-story monuments.

"A small format for me is 3 to 6 floors, 15 floors is a medium format and 25 floors would be a large format," explains Okuda. "In fact, I actually have four of these [25-floor murals] in the world, in Toronto, Kyiv, Paris and Moscow."

Before his global success, however, Okuda started out as a street artist, transforming abandoned factories and highways on the roads of Santander, Spain.

He believes that his roots as a street artist have an important impact on the way he interacts with the public around his work.

“It's very different from the people who always paint in their studio,” says Okuda. “Because in the end we are used to undressing ourselves from the beginning, showing the whole evolution of the work and having that constant feedback during the creative process, as people walk in front of the mural.”

Okuda says his work is inspired by surrealist artists like Dalí, Magritte and El Bosco and addresses themes related to love, freedom and existentialism but in particular: multiculturalism.

“The use of colour… especially in the bodies and geometric faces represents multiculturalism: all races in one, all flags in one,” Okuda explains.

This recurrent theme of diversity has also been influenced by his 20 years of travelling around the world.

Okuda says these years of cultural experiences have a huge impact on his work:

"Let's say that after all these trips, I feel more like a citizen of the world," says Okuda. “I think that the richness in humanity is just all the different traditions in different cultures and I would say they are the main engine for human evolution.”

And it isn't just the final destinations that inspire Okuda, but the journey to get there.

“Especially when I'm flying on planes,” adds Okuda, “this is where I feel the furthest away from the frantic pace that comes with capitalism in cities. Here I'm closer to the clouds so that's where I come up with the best ideas, really.”

“You can't imagine how simply painting a mural or having a sculpture changes a place… It’s not the same for a child to grow up in front of a large grey façade versus a mural or sculpture. I do believe those colours will contribute positively in their lives,” Okuda says.

To help develop the social impact of his work, Okuda has set up a foundation to work on projects in deprived or marginalised communities.

“The Coloring the World Foundation tries to change degraded or socially abandoned spaces… transforming them into colour, into positivism.”

The foundation also works to involve communities, and people of all abilities, in the creation of these artworks.

“I think that the best part of my work is simply these experiences," Okuda adds.

"I get to meet people who leave me... in awe. Not only do I transmit things to them through my work, but it's something reciprocal, they give the same back to me. As an experience, on a human level, it's something incredible.”

Discover Okuda's incredible art and hear more about his social projects by clicking on the video player above.

I design otherworldly costumes for Istanbul’s queens and performers