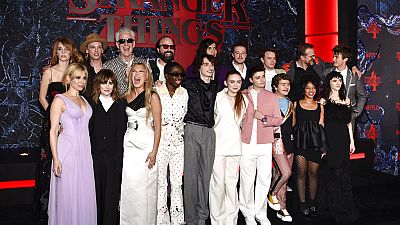 The final two episodes of Stranger Things Season 4 are finally upon us.

Season 4 of the series was released in two volumes, with the first volume containing seven episodes and the second volume, just two.

After leaving fans in awe after the first volume was released on 27 May, people are desperate to know how the season will wrap up.

As of today, 1 July, "Chapter Eight: Papa" and "Chapter Nine: The Piggyback" are available on Netflix - and they're whoppers. Chapter eight is one hour and 25 minutes long and chapter nine is two hours and 30 minutes long.

What does the cast think?

Stars of the hit Netflix series Stranger Things promised a dark and thrilling new season at the season's premiere.

Season four of the sci-fi horror drama will be "scarier, gorier and more violent," warned actor Noah Schnapp, who plays Will. "Be ready for that when you tune in."

"[Hopper] has never been as brutal as he is this season ...  He has to fight these horrible threats, you know, monsters, Russian guards, a prison environment, the snowy tundra in bare feet [and] malnutrition."

"I can't give up too much but this season ... is definitely more intense [and] definitely a lot more darker," said Lucas Sinclair actor Mclaughlin. "Oh, man. What can I say that I can't spoil [it]."

Set six months after the Battle of Starcourt (season 3), Stranger Things 4 depicts the Hawkins friends' struggling after the horror wrought on their small town.

Apart from one another for the first time and feeling lonely, they are trying to move on with their lives.

That is until an other-worldly threat comes on the scene, bringing with it clues to solving the riddle of the 'Upside Down'.

"We're not just dealing with the Upside Down," said Mclaughlin. "We're dealing with our own personal issues as well."

"I feel like this season is going to answer a lot of questions for our fans," he added.

The much anticipated season four comes after COVID-19 caused a three-year hiatus, with the last series aired in July 2019.

Speaking to AP reporters, actors at the premiere said they were looking forward to seeing their characters grow and develop in the fourth season.

"It's something that everybody gets anxious about and seeing where he's going to fit in with new older kids that he wants to impress," he said.

Sadie Sink said her character Max Mayfield will be in "a pretty dark place" this season but she added it was nice to "tap into" that side of her.

"It something we don't often do on the show, which is just [to] stop and think like, hey, how is this trauma affecting our characters?

"Trauma is a huge theme throughout all of season four really," she said.

Other actors were relieved that their characters had been spared the more intense moments of the show.

"It's funny because my character ... is in almost the thriller kind of action ... whereas a lot of the other actors are involved in the kind of, yeah, the brutal aspect," said Vancouver native Finn Wolfhard, starring as Mike Wheeler.

"I got the light stuff this year," he added.