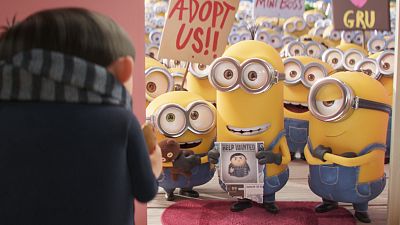 Annecy in France becomes the world's animation capital every June with its international film festival.

Around 100 countries are represented at the animation festival, where around 500 films are screened with more than 100,000 spectators.

The festival, which covers all formats and genres, opened on Monday with the world premiere of Minions: The Rise of Gru. The blockbuster movie looks back at the youth of Gru - the evilest of all super-villains.

"Feature-length animation is a format that has developed enormously in Europe over the last 20 years," said artistic director Marcel Jean, at the helm of the festival for the past 10 years.

"So there are all these possibilities that facilitate, that favour co-production," he added.

Among the 10 films competing for the top prize, the Cristal, eight are co-produced with at least one European country.

Among them, Nayola, is a co-production between Portugal, Belgium, the Netherlands and France, and tells a story of three generations of women in Angola affected by the long civil war.

"This European idea is very present in animation, which leads us - since we are talking about Europe - to talk about Ukraine and to have a thought for Ukraine," said Marcel Jean. "This year Annecy wanted to give a tip of the hat to Ukrainian animation and to remind all the festival-goers that a country, a country that is significant in the world of animation, is experiencing an extremely dramatic situation."

Cannes film festival over the decades - in pictures

Celebrity canines get teeth into awards at film festival