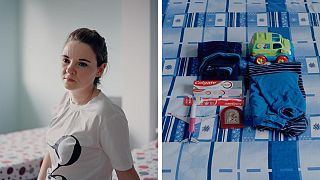 Baby bottles, warm outer layers, a child's plastic toy - a little truck on wheels - for the days and weeks to come. The contents of the suitcases of mothers fleeing Ukraine tell a heartbreaking story of rupture, uncertainty, and decisions no parent should ever have to take.

The stories of four women and what they took with them have been captured in a new series of portraits by the British photographer Lewis Khan. His images tell of their fight for survival, but also their grief at having left behind places and people they may never see again.

Most of the women packed light. They had no idea how long the war would go on and most made the decision in a hurry. Iryna (not her real name), from Kyiv, had just 24 hours to decide before the curfew if she should leave with her 10-year-old daughter Nikolina.

In the end they did, leaving behind her mother who was too sick to travel. Iryna was also seven months pregnant and made the train journey huddled in a disused toilet with her daughter to escape the crowds.

“For my child and my unborn baby," she said, "I decided, if I can, I have to go. They have their whole lives ahead of them. At each stop we were so scared."

Vira, 26, a mother-of-two, decided not to tell her eldest, three-year-old Marta, why they were leaving Ukraine. She tried to present it as a big adventure. But crossing the border was traumatic. “I had a sort of panic attack," she said. "I was afraid of the border, and I didn't want to leave Ukraine.”

Mariya, from Dnipro, left with her four-year-old son after missiles hit their home town. They took the first train they could heading west towards Romania. “It was the scariest day of our lives,” she said. “We didn't know where we would live or how. It was a journey to nowhere."

Accommodation was secured for each of the families by Save the Children, which is also providing them with cash voucher support, medical assistance and legal advice. CEO Gabriela Alexandrescu said: “Each one of these stories is a powerful reminder of what millions of families have been through as we mark the first three months of this terrible war.

"In the space of just over 90 days, the war in Ukraine has unleashed the largest refugee crisis since World War II. We call on all parties to end this brutal war and end the suffering, to help rebuild the devastated lives of millions of people across the country.”

More than 6.3 million people, of whom about half are children, have now fled Ukraine in search of shelter in neighbouring countries. Of these, 924,000 have settled in Romania.

Milena, 22, feared for her life as the sirens wailed and the bombs fell in her home in Ivano-Frankivsk Oblast, Ukraine. She lives next to a major gas pipeline and was afraid it would be blown up. She decided to leave with her one-year-old baby Bohdan, organising the journey herself.

Her parents are still in Ukraine, with her mother helping refugees in Lviv. “My heart is in Ukraine,” she said. “It’s painful to leave my home and country. It was difficult to say goodbye to the men in our lives at the border. We didn’t know if we'll ever see them again."  She plans to return to Ukraine when the conflict dies down.

The final two episodes of Stranger Things 4 have finally dropped

3 cultural events you need to know about this weekend

This museum has a painting you can smell

Why does anyone buy cassette tapes?

The final two episodes of Stranger Things 4 have finally dropped