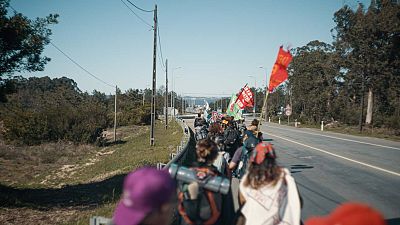 SCENES shines a spotlight on youth around the world that are breaking down barriers and creating change. The character-driven short films will inspire and amaze, as these young change-makers tell their remarkable stories.

When António Assunção and Nina Van Dijk came across an open post inviting school students to join them on Friday, 25th March 2019, little did they know the moment would change the course of their lives.

"I've always been concerned about environmental issues since I was little, because of the upbringing, but in 2019 with those huge crowds taking to the streets, I felt 'Ok, it's time to do something'," recounts Nina.

From meetings to blocking roads and joining student protests, climate concern soon turned to climate activism. The 18-year-olds were determined to make their voices heard. "Activism is a way for us to leave our footprint on the planet and in history too. To make our own history and not just let it be told for us," António told Scenes.

From 2nd April to 16th April this year, Nina and António were among the hundreds of young activists to take part in the Caravan for Climate Justice. The 400 km march passed through the centre of Portugal, from Leirosa to Parque das Nações in Lisbon. More than 120 people participated in the event, coordinated by Climaximo, Portugal's largest and oldest climate collective.

For two weeks, the environmental campaigners travelled by foot, train and canoe to draw attention to the climate and biodiversity in the country. "The caravan's main objectives are to create a more diverse movement and to establish networks with everyone," explains António. "Creating a movement of movements that strives for a better, more just planet, where everyone can live," he adds.

The group connected with thousands of people along the way. They saw a need to engage with communities that had lost homes and livelihoods through forest fires and drought.

"We listened to what they were feeling firsthand. We try to look for real solutions to tackle the crisis we are living through," explains Nina. "Also to let them know that they are not alone. That many people are willing to walk 400 km to meet them, talk with them and spend time together," adds António.

Along the route, the caravan promoted debates in schools, theatres, gardens and on the doorsteps of some of the country's largest greenhouse gas emitters. The caravan aimed to captivate, collaborate and create a vast network to respond to climate change collectively.

"The fight for climate justice is essentially a fight for a system that prioritises people over profit," says Nina. "It is the struggle for a sustainable future, where people are above big companies' profits," she adds.

Portugal is one of the largest producers of paper in Europe. The pulp and paper trade accounted for 4.9 per cent of all exports prior to the Covid-19 pandemic. A recent study by the University of Évora found that the forest-based industrial sectors represent two per cent of Portugal's national GDP, contributing 2.6 billion euros to their national trade balance and are responsible for over 115,000 direct jobs.

The caravan's theme was fire and water to highlight the fight for clean water and safety from wildfires. For five days, the procession marched through areas ravished by the worst wildfires in Portugal's history. In June 2017, the country experienced a series of deadly wildfires that burnt more than 560,000 hectares of forest, claiming more than 100 lives.

"We walked by the 'road of death'. A road where people fled for their lives and died trapped in the flames," António explains. "There were Eucalyptus tree plantations on either side of the road. Their cars stopped running, and these people didn't manage to escape."

In 2018, local municipalities from some of the worst-hit areas, revised their forest management plans to help reduce the risk of bushfires and make housing environments safer and more resilient to fires.

After the 2017 fires, the Portuguese government legislated that trees and brush must be cleared from roads, to create a ‘buffer zone’ of 10 metres on either side, using the tarmac to slow the progress of the blaze — and to create a safer road if people need to escape.

"The Eucalyptus trees have such an impact and fuel so many fires, but they also husher in desertification as they take in a lot of water," explains Nina. "The other indigenous species are unable to survive near them in desertified soil, which becomes infertile and therefore even more prone to fires."

Portugal has more land dedicated to Eucalyptus plantations than any other EU country. According to the Global Forest Coalition, almost 10 per cent of Portugal is planted with Eucalyptus trees. The trees are predominantly used in the paper industry.

On the 11th day, the caravan walked to the gates of Ródão in Vila Velha de Ródão, which represents the gateway of the Tagus river into Portugal. The stop marked the turning point of the caravan from 'fire' to 'water'.

They canoed, walked and rowed their way down the river to mark the importance of the ecosystem, habitat and the local economy. "We had conversations about the need to stop building dams because a river is not supposed to be cut, it has its natural course, " states Nina.

On the 16th of April, the caravan concluded its historical journey by walking alongside the Tagus river till they reached their final destination in Lisbon. "All the great revolutions in history have been achieved collectively," said Nina. "So, collectively, we should organise and mobilise to create greater impact and for change to be really effective."

The most international band you've ever seen

Qatari chef cooking up a storm in Doha

Meet the team who are preserving marine life in Mallorca

From the favelas to the Olympics: the Brazilian breakdancer determined to make her country proud

Why cinema tickets are going to be just €4 in France