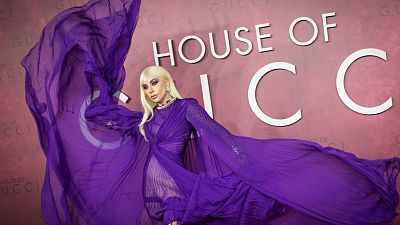 Lady Gaga poses for photographers upon arrival at the Europe premiere of the film   -   Copyright  Vianney Le Caer/Invision/AP
By Shannon McDonagh  & AP  •  Updated: 11/11/2021

Lady Gaga says her extensive preparations to play Patrizia Reggiani in 'House of Gucci' may have a long-lasting effect on her.

Gaga spent nine months living with an Italian accent at all times so she could build her character in the highly-anticipated Ridley Scott drama. She now says she is unsure if she'll ever be the same again.

"I don't know that she'll ever leave me fully, but I do know the parts of her that I would desperately want to leave behind and the parts that were empowering and beautiful."

Directed by Ridley Scott, 'The House of Gucci,' is based on a book about Reggiani's marriage into one of the world's most decadent families that ultimately ends in murder.

Hollywood actors are often invited to dive into indulgent, transformative periods of going "method" -the process of identifying with a part by 'crawling under the skin' of the character.

So far, this has worked well for Gaga. Early reviews suggest she is by all accounts the film's highlight.

But for other performers, it has been a burden.

We've taken a look at some of cinema's most prolific examples of method acting.

Leonardo DiCaprio's slept in an animal carcass for The Revenant

Regardless of what you think about 'The Revenant' being the film that finally got DiCaprio his Oscar, there are no doubts that real-life blood, sweat, and tears went into his performance.

Many of the details of his outdoor experiences are gory and outright disturbing.

DiCaprio is virtually unrecognisable as Hugh Glass as he traverses the freezing temperatures of the Dakota's, facing bears, cliffs, and being buried alive.

The vegetarian ate raw bison meat and slept inside a dead animal carcass to attune himself to Glass' dark emotions and deprived senses.

His cast and crew once referred to his experience of the process as a state of constant "possible hypothermia".

Everyone's favourite experimental British accent had quite the journey when transitioning from indie films to major motion pictures.

Zellweger's roles of the early 00s - the titular character Bridget Jones and Chicago's lead, Roxie Hart - required drastically different body types. And she wasn't given a lot of time to manoeuvre.

The Texan famously gained 30lbs to play Bridget by eating a reported 20 doughnuts a day.

She then shed the weight and even more body fat in a strict 24-day diet when production closed to prep herself to sing and dance as Roxie.

The wellbeing of actors is taken a little more seriously these days with careful conversations about what it means to transform your body so harshly.

Zellweger said she once had a panic attack in 2007 after speaking to a health expert about the implications of abusing her internal organs over short periods of time.

It clearly had an impact - the actress has been papped playing murderer Pam Hupp for a new NBC series. This time, she dons a fat suit.

There has been a notable critical shift, too. In a reflection on this period of Zellweger's career, titled, 'Did Bridget Jones Make Us Hate Our Bodies?' Vogue lamented how: "articles touted her figure in Chicago“—which was notably thinner—“as the ideal and Bridget Jones as this horrific, gross sacrifice for her art.”

Another fan of intense, all-encompassing physical transformations, Christian Bale has been just about every size imaginable and continues to put his body through hell in the name of acting.

Whether it's bulking up and getting dental work done to play murderous, handsome Patrick Bateman in American Psycho, or losing 60lbs for a distressing stint as an insomniac in the 2004 thriller 'The Machinist', there is little he won't do to act his dream roles.

In a similar turn to Zellweger's rapid Bridget-Roxie timeline, Bale was required to debut as Batman in 'Batman Begins' eight months after wrapping 'The Machinist', an 100lb muscle gain that even director Christopher Nolan deemed too much.

"When I arrived in England, Chris Nolan looked at me in shock, saying, 'God, you're like some sort of grizzly bear!'" he told Femme Fatales.

Bale refutes the idea that he is a method actor at all. He made headlines last year by citing none other than Rowan Atkinson as his primary inspiration.

The 1991 film saw her play Vivian, a drug addict. Though her screen time was sparse, Berry didn't wash for two weeks prior to filming and spent a period of time researching Harlem's crack houses first hand.

She got so into the rhythm of not bathing that she continued to soap dodge for the duration of shooting - a further six weeks.

It's clear to see why she treated the opportunity so seriously - Spike Lee is responsible for launching the careers of some of Hollywood's biggest Black actors.

Experiencing Samuel L. Jackson in 1989s 'Do The Right Thing' counts as borderline surrealism at this point in his present career.

Kate Winslet (regrettably) isolated herself from the cast of Ammonite

Kate Winslet has vocally opposed her own approach to playing palaeontologist Mary Anning in the period drama 'Ammonite'.

Winslet saw Anning as a deeply isolated presence that would not benefit from the actress going back to cosy hotels every day after shooting.

A chilly coastal cottage in Dorset became her residence for the duration of the shoot. This is something she now regrets as it pushed her into loneliness and boredom.

She told Stephen Colbert on 'The Late Show': "It was so isolated, cold and rattly that when there was a big storm the waves would hit the windows of the house and the power would go down and I would lie there thinking, 'Kate what are you doing?' Just go to the hotel with everybody else."

Quite the opposite to the warm, festive countryside setting her character in 'The Holiday' abandons in favour of LA sunshine.

Robert Pattinson got horrifically drunk on the set of The Lighthouse

Hollywood's most endearing oddball famously suggested that going method was a bit of a sham used by actors in order to be a little bit difficult.

"You only ever see people do the method when they’re playing an a–holes,” Pattinson joked.

“You never see someone being lovely to everyone while they’re really deep in character.”

Pattinson's early career was famously spent abiding by this philosophy. The production crew of Twilight had to draw abs on the young actor using makeup when he didn't work out to play the sparkly heartthrob.

However, the Brit did experiment a little with it when starring in 2019's 'The Lighthouse', a role that required him to be insanely drunk. The actor didn't take to this lightly and spent most of his hours on set "virtually unconscious."

If he didn't feel drunk enough he'd spin around in circles before a take and leave stones in his shoes to limit his mobility.

“It was crazy,” Pattinson told Esquire. “I spent so much time making myself throw up. Pissing my pants. It’s the most revolting thing. I don’t know, maybe it’s really annoying.”

An older, but deeply relevant example. Marlon Brando was one of American drama's earliest students of truly becoming your character.

As a young actor he studied under Stella Adler and learned the techniques of Konstantin Stanislavski, whose books 'An Actor Prepares' and 'Building a Character' have been seminal texts for over a century.

Actors are encouraged to fully realise the internal aspects of their performance and ask themselves how they would react if they were this character in any given situation, leading to an organic symbiosis where you 'become' your version of that person.

Brando's performance as Stanley Kowalski in A Streetcar Named Desire has been argued as a turning point in film history where lines blur between acting and the real person.

It's clear to see this stayed with him throughout his career that spanned six decades.

He spent a month in a hospital bed to prepare for his role as a veteran in 'The Men', and stuffed his cheeks with cotton wool to create his bulldog-like appearance in The Godfather, later replaced by a mask that was reportedly very uncomfortable to wear.

'House of Gucci' debuts November 25 in most of Europe and November 26 in the UK.

Lady Gaga releases the teaser for 'Joker' sequel - but do we need one?