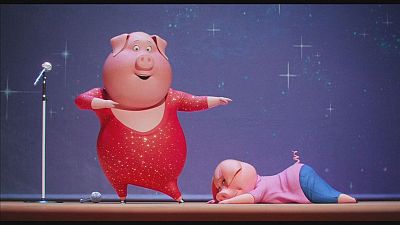 The movie “Sing” features a host of voices from the stars of the silver screen.

It tells the story of an animal singing competition staged to raise funds to save a theatre which is under threat from closure.

Reese Witherspoon is the voice of Rosita, a domestic pig, who gave up her teenage music dreams to become a devoted mother to 25 piglets.

“She’s a mum and she’s got so many children, she’s got twenty children but she always had this secret dream to be a singer so when this competition comes to town she is just desperate to try,” said the actress.

The movie features more than 85 classic songs from various artists, as well as an original song by Stevie Wonder and Ariana Grande.

In this sort of animal version of “The Voice”, Tori Kelly ‘plays’ Meena, a teenage Indian elephant with an exquisite voice, and severe stage fright.

“Meena is a very shy timid elephant but she loves to sing very much like myself and I relate to Meena a lot because I was a really shy kid and I would get on stage and I just was awkward and very stiff,” admitted the star.

Taron Egerton Will Make You Swoon in Sing: 5 Things to Know About Your Next Celebrity Crush https://t.co/6v0ptvDSnM

Taron Egerton is the voice of Johnny, a Cockney-accented mountain gorilla, who wants to sing, but his father wants him to follow in his criminal footsteps.

You’ll also hear the voices in the movie of Matthew McConaghy, Seth MacFarlane and Scarlett Johansson. Sing opens in the UK in January.

Tim Burton lights up the Festival Lumière in Lyon