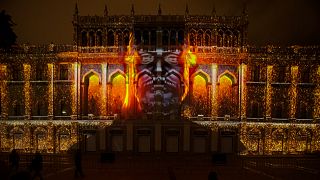 For three days, Baku became a stage for the immortal creations of one of the greatest poets and masters of all times, Nizami Ganjavi. As the year 2021 is the year of Nizami Ganjavi in Azerbaijan, the first Baku Festival of Lights was dedicated to the life and work of the author.

The aim of the festival was to unravel Nizami's creative ideas in vivid visual images, expressing the philosophical subtext of the works.

The festival program included miniatures dedicated to the poems of "Khamsa" and came to life on the facade of the Nizami Museum of Azerbaijani Literature.

Within the framework of the festival, the era in which Nizami lived and worked was presented through his poems. During the 3D mapping show, miniatures of the "Khamsa" were shown, and each of the seven was presented in its own color palette, with effects and musical accompaniment.