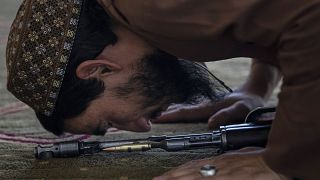 An Afghan cleric welcomed the fall of the former government and the return of the Taliban during a sermon at a mosque in Kabul.

The imam told worshippers that "the Americans and the Crusaders" had helped to overthrow the Taliban 20 years ago.

"They thought that no one will take the name of Islam in this country again," he said, referring to American and other international forces who entered Afghanistan after the 9/11 attacks in 2001.

But the Taliban were now back in charge, and "Almighty God honoured and helped the Muslims of Afghanistan," the imam declared.

Taliban fighters were among the congregants taking part in Friday prayers, their guns slung over their backs or placed on the carpet where they knelt to pray.

One fighter said he was overjoyed that the militant group had been able to regain control of the country in such a short time.

"This is good news for all of us that all Afghanistan is secure now," he said.