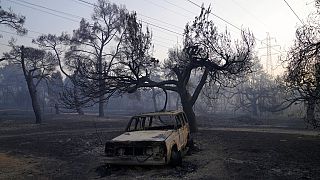 Residents faced Wednesday the aftermath of a savage wildfire that broke out in the northern suburb of Athens, Varibobi, burning down homes, businesses and vehicles.

The fire in the Varibobi and Tatoi suburbs of the capital was the worst of 81 wildfires that broke out around the country in 24 hours from late Monday to late Tuesday.

Nikos Karangelis said he did not know how his house was spared from the fire while all his neighbours' burnt down.

Fellow local Kyriakos Bardis told The Associated Press he felt "bitter" as he looked at the damage in his neighbourhood.

Five water-dropping planes and nine helicopters were helping more than 500 firefighters, soldiers and numerous volunteer groups on the ground, the fire department said.

Apart from the fire north of Athens, two more major forest fires were still burning Wednesday morning, one on the island of Evia and one in the southwestern Peloponnese.