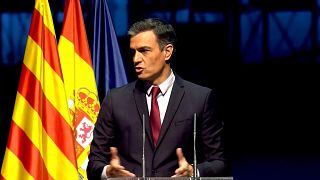 Protesters staged a demonstration on Monday, June 21, in Barcelona, as Spanish Prime Minister Pedro Sanchez was delivering a major speech, outlining his government’s plan to address the polarising issue of independence in Catalonia.

A group of pro-independence protesters gathered outside Barcelona’s Liceu Theatre, where Sanchez was addressing regional leaders.

His speech comes as his government is poised to announce a controversial decision to pardon 9 Catalan independence leaders convicted two years ago over their roles in Catalonia’s failed 2017 independence bid.

Sanchez said his leftist government has "opted for reconciliation" and believes the controversial measure would "pave the way for this path".

The move, deeply unpopular by the Spanish public and right-wing parties, was met with protests in the capital Madrid where many accused the country’s Socialist-led coalition government of mainly seeking parliamentary support from Catalan parties.

Sanchez however, defends his decision as a way to halt the region’s secession drive and to help the social and political coexistence between Catalonia and the rest of the country.

Catalonia’s new regional government has welcomed the move as a “first step” toward normalising relationships with the central government.

Pro-independence Catalan protesters, however, oppose a possible dialogue between regional leaders and the Spanish government, saying they will lose the momentum to reach independence.