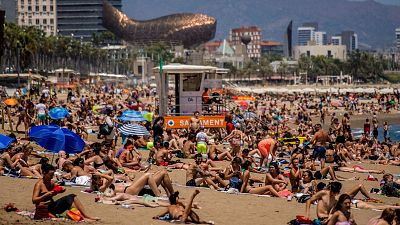 Barcelona is banning smoking on all its beaches following a successful trial in 2021.

The ban, which comes into effect on 1 July, is designed to protect the environment and ensure the right of citizens to enjoy a clean, unpolluted space, free of smoke and cigarette butts.

For now, council workers are asking beach-goers to refrain from smoking. But in just a few months, this suggestion will be replaced with a €30 fine.

"I think it's fair, to keep the beach clean. Also because of the environment. But being able to control every single person will be extremely difficult” said Antonella Bellotti, an Italian tourist.

She suggested keeping a designated smoking area “with trays for ashes and cigarette butts. To keep everything clean."

The city council says the pilot program last year significantly reduced the number of smokers on the beach and cigarette butts in the sand.

Smokers have left five billion cigarette butts at beaches worldwide every year, which end up in the sea and take decades to decompose.

Evelyn Varkonyi, a tourist from Austria, says the ban is necessary “because most people throw cigarettes in the sand.”

“I don't do it. But I can understand. And it's not good for nature."

Barcelona will become the first major city in Spain to ban smoking on beaches.

So far, 115 of Spain's 3,514 beaches have prohibited smoking, but that may change soon. A countrywide law is currently being debated that could turn all of Spain’s beaches into smoke-free areas.

Watch the video above to see how Barcelona is preparing for the summer smoking ban.