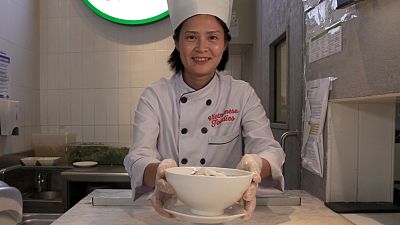 There are over 5000 Vietnamese nationals and people of Vietnamese descent living in the UAE. Their culture and love of food have filtered into the mainstream culinary scene in Dubai.

Many of the ingredients used are locally sourced in the United Arab Emirates, such as mint and coriander. However, to make the dish as authentic as possible, she imports many spices directly from Vietnam, such as cardamom, cinnamon and star anise. Lily added, "this allows the dish to have the exact same taste as it does in Vietnam".

The taste of pho in the north of Vietnam is plain and more suited to a pure palate. In contrast, pho consumed in the south is packed with flavours. As a proud Ho Chi Minh, southern native, Lily told Euronews that she likes "a lot of texture, colour and a flavour" in her food.

The key to a good pho is apparently in the broth. In the north, the bones used to create the broth are not roasted. As a result, the broth is less brown in colour. Lily explained that the bone choice for the broth is essential and can dramatically improve the taste of the dish. She said, "don't just use any bone. You should use a knuckle bone which contains more marrow in it. This will give your broth a better taste".

If cooking a pho for the first time, Lily suggests avoiding the common mistake of not using enough bones in the broth. Adding "having more bones will give the broth a deeper flavour".

2. 3 ltr of beef broth (recipe below for broth)

12. Handful of sawtooth coriander on the side

Add 1kg of beef shank in the beef broth for 1 hour on medium heat until just cooked but not too soft.

Remove the meat and slice it into 3mm thin slices.

Roast the spices (cinnamon, coriander seeds) on a hot cooking pan for 2 minutes to bring out the flavour.

Put them in a tea bag and place it in the broth.

Note: you should do this step just 30 minutes before serving.

Cook the rice noodle as instructed on the package.

Once ready to serve, warm up the noodle, then pour boiling broth over it.

Garnish with slices of meat, chopped green onions, bean sprouts and serve piping hot with Thai basil on the side.

Peel and wash the onion.

Chop them roughly into big chunks.

Charbroil the ginger, then peel off the burnt skin and crush it lightly.

Roast the star anise and cardamom.

Roast the beef bones in the oven for 1 hour at 200-degree Celsius.

In a medium pot, add the roasted beef bones, water, onion & ginger, star anise, and cardamom, bring it to a boil, then reduce heat to low.

Add salt, then simmer for 6 hours. Let cool and strain before use.

A sustainable tourism lab is transforming the island of Rhodes