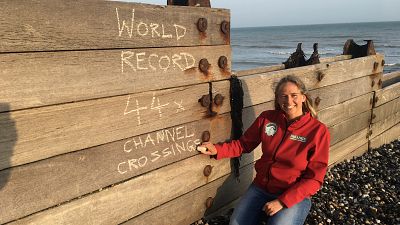 Welcome to Euronews Travel’s Women Beyond Borders, the series which brings you real life accounts from women around the world who are living brave, adventurous lives, and conquering personal challenges on the road. These women live for travel and adventure.

While some are crossing the world in pursuit of the most unique experiences, or pursuing a lifestyle that many would dream of, others are breaking the mould of traditionally male-dominated industries. We want our series to inspire you to believe in the power of your own dreams.

Despite growing up in sunny Australia, Chloë McCardel couldn’t swim until she was 11-years-old.

“I was the old kid in learn-to-swim [...] but I was super determined,” Chloë tells Euronews.

Within a year Chloë had begun competitive swimming. Although she performed well at junior national level, Chloë didn’t make the cut for the Olympics and stopped competing at age 16.

And now, at age 36, having just won the world record for the greatest number of English Channel crossings, Chloë is the greatest marathon swimmer in history.

This is what she wants you to know about resilience:

‘I think I can be the best in the world at a sport’.

That was the conviction Chloë had at just 19. She truly believed that if she could just find her niche, she could be the best. So began a long process of trial and error. She tried out lots of sports, including triathlon and marathon running.

“When I swam my first marathon swim, there was just something incredible, almost spiritual, about swimming in the open water,” Chloë remembers.

That’s when she knew she’d found her sport.

Eventually Chloë decided to take on the English Channel known for being one of the toughest marathon swims in the world.

“It is the place in the world to test yourself if you're an ultramarathon swimmer,”Chloë explains.

What is marathon swimming?

The English Channel swim is 34km in distance. Sometimes Chloë swims two or three crossings, English to France and back again, without stopping.

She has a boat alongside her the whole way in case she gets into difficulties and so that her team can pass her a drink of water periodically.

According to Chloë it’s not the distance of the English Channel that makes it so difficult. It’s the treacherous conditions.

“There's really strong tides that rip up to 11 kilometres an hour, [..] the water is cold, there's up to 2 metre waves,” she explains.

“We're not designed to swim in cold water and eventually it will induce hypothermia in everyone. It just depends on how long you stay in there and how well trained you are in cold water.”

On average it takes Chloë ten and a half hours to swim one English Channel crossing, with her fastest crossing ever coming in at eight hours and 51 minutes.

How can you develop the mindset of a champion?

When Chloë set out to become the best marathon swimmer in the world, she thought that meant swimming the longest distances.

Whilst she trained to swim further and further by attempting double and triple crossings of the English Channel, Chloë was already unknowingly on course for her Channel record.

In 2014 she did earn the record for the longest marathon swim in the ocean ever when she swam 124km non-stop in the Bahamas. It took her two full days, swimming under the blazing sun and by the end she was badly burnt and covered in jellyfish stings.

She beat the men’s record of 34, which is held by British swimmer Kevin Murphy, back in 2020. The women’s record (and also the world record) was held by another Brit, Alison Streeter, who swam the English Channel 43 times.

Along the way to achieving this record, Chloë also bagged herself the record for most Channel crossings in one season, when she swam the English channel 8 times in 2016.

“I think there's sort of a contract and understanding that if you get into marathon swimming, you're going to go through pain, physical pain, emotional, mental pain. It's going to be a test of your spirit, against the elements, against your best potential that you can pull on that particular day.”

“So I choose to lean into that physical pain, lean into that mental pain and know that I don't need to run from this. [...] I have confidence built up from previous successful marathon swims that I can lean into it, I can get through it.“

Internal motivation is everything

Throughout all of her record-breaking, Chloë has been driven by a strong motivation: advocating against domestic violence.

“It's something I've experienced personally and swimming has been enormously helpful for me on my journey out of domestic violence,” she tells Euronews Travel.

“I was diagnosed with post-traumatic stress disorder (PTSD) and up until the end of 2019, I was really struggling and swimming was great because when I exercised, especially at high intensity, I would release endorphins and that would calm me down if I was feeling a bit anxious.”

“And it was also a change of shift. I couldn't really worry about my life outside swimming when I was in the middle of a difficult set that required my attention and my focus.”

"If there's one thing I'd like people to take away from my marathon swimming journey, it's to keep fighting and chasing your goals no matter what. If you're struggling with support, people not believing in you, if you're struggling to access resources to support you to your goals, if you're failing along the way to your goal, I just say 'hold tight'. Believe in yourself and start developing a team of people around you who believe in you and just keep going."

Watch the video above to witness Chloë’s marathon swimming journey.

This woman is running the world for a very important cause

Meet the travel photographer living her dream through the camera lens

Visit quieter corners of the world with this solo female influencer