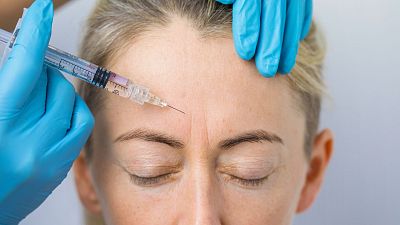 Some scientists think Botox injections could be used as part of treatment for some mental health conditions   -   Copyright  Canva
By Luke Hurst  •  Updated: 30/09/2022

Botox injections may help alleviate the symptoms of mental health conditions such as depression and anxiety, results from a new study suggest.

Botulinum toxin (BTX) injections - often shortened to Botox - are primarily used for cosmetic procedures, as they cause muscles to relax. When applied to certain areas of the face, Botox can smooth out lines and wrinkles.

This relaxation of facial muscles has been the subject of a number of studies, with researchers seeking to find out if it could be used to alleviate symptoms of mental health conditions.

Specifically, the idea is to target what evolutionary biologist Charles Darwin called the “grief muscles”.

"This whole field of research using botulinum toxin as a treatment for mental disorders is based on the facial feedback hypothesis," Dr Axel Wollmer, a psychiatry expert and researcher at the Asklepios Campus Hamburg of Semmelweis University and a senior author of the study, told Euronews Next.

He said this hypothesis dates back to Darwin and William James (known as the “father” of American psychology) in the 19th century.

It states that our facial expressions do not only communicate our emotional state to others - they also report it back to ourselves.

"So the one reinforces the other and it escalates perhaps to a critical level of emotional arousal that may be a problem in mental health conditions," said Wollmer.

Along with researchers from the Hannover Medical School in Germany, Wollmer and his team set out to build on previous research into Botox injections in the glabellar region - the area of the face above the nose and between the eyebrows, which people often tense up when they experience negative emotions.

"Once we activate facial muscles to express an emotion, we generate a proprioceptive signal that runs back from the face to the emotional brain and that reinforces and maintains this emotional state," said Wollmer.

"Only by embodying this emotion, we really feel it as a warm, whole emotion. And once we suppress this embodiment, the emotion calms down and is no longer perceived as such".

The scientists wanted to capture what happens in the brain when this positive feedback loop is broken, by relaxing the grief muscles. For this study, they looked at 45 female patients with borderline personality disorder (BPD), one of the most common personality disorders.

The team explained that patients suffering from BPD experience an “excess of negative emotions”, including anger and fear. Wollmer said BPD patients are "in a sense, prototypical of being overwhelmed time and again by a host of negative emotions they cannot really control".

Some of the research participants received Botox injections, while a control group received acupuncture.

Before the treatment and four weeks later, the participants were given a so-called emotional go/no go task - where they had to control their reactions to certain cues while seeing pictures of faces with different emotional expressions.

This was done while the researchers scanned their brains using functional magnetic resonance imaging (MRI scans).

This trial delivered mixed results: both the Botox and acupuncture patients showed a similar improvement after treatment, but the team were encouraged by two other findings.

With the MRI scans, they demonstrated for the first time how Botox might modify the neurobiological aspects of BPD.

The images showed a reduction in the activity of the amygdala region of the brain in response to the emotional stimuli.

"We found a soothing effect on the amygdala, which is very critically involved in the processing of negative emotions and is overactive in borderline patients," said Wollmer. This, he added, was not observed in the control group treated with acupuncture.

The researchers also noticed that Botox reduced the patients’ impulsive behaviour in the go/no go task, and it correlated with the activation of prefrontal areas in the brain that are involved in inhibitory control.

The limitations of the study are its small size - just 45 participants - and the fact these were likely able to tell whether they were getting acupuncture or actual Botox injections because the effects of Botox are so obvious.

Previous research has looked at how Botox injections may be able to break feedback loops in other regions of the face - and body.

A 2021 study, which analysed the data of 40,000 people Botox patients in the US Food and Drug Administration database, found that anxiety disorders were 22 to 72 per cent less common than in patients who had received other therapies for the same conditions.

Similar research was conducted in 2020 about the possible antidepressant effects of Botox injections, which showed they could be used not only to treat depression, as several previous studies had already suggested, but might also have a protective effect against the condition.

"As has been shown before in healthy volunteers, there are some changes in a brain structure that are very important for the processing of negative emotions. And this is, of course, also critical for depression," said Wollmer.

He added that established treatments such as psychotherapy or antidepressants don’t work well enough for around a third of patients with depression, "so there is a need to develop novel treatment options, and this is where BTX injections could have a role".

Wollmer, who has been on an advisory board of Botox maker Allergan, would like to see the findings further investigated in a large Phase III clinical trial.

From that point, he said, researchers would be able to see if any other mental health conditions might be addressed using this approach.

The joint study was published in the journal Scientific Reports.

EVs explained: A look under the hood to see how electric cars work