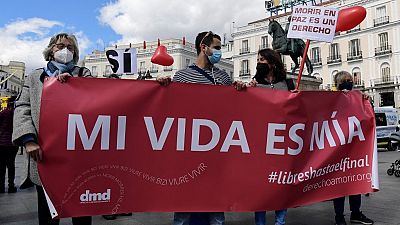 French president Emmanuel Macron has announced a national debate on the legalisation of assisted dying and euthanasia.

A 2016 French law allows doctors to keep terminally ill patients sedated before they die, but it stops short of allowing assisted suicide.

Some French citizens - and citizens of other European countries - travel to neighbouring countries where assisted dying or passive euthanasia is allowed.

The issue is currently under debate in a number of European countries, while over the last few years more countries have changed their laws to decriminalise or legalise means of voluntarily ending life.

So, where is assisted dying legal? Euronews looks at the state of legislation in different EU countries.

What is assisted dying?

Assisted dying refers to both voluntary active euthanasia and physician-assisted death. These two types of assisted dying distinguish a difference in the degree of the doctor's involvement.

Voluntary active euthanasia involves the physician playing an active role in the patient's request to die, usually by supplying an intravenous lethal substance.

Physician-assisted death implies that the medical personnel provides the patient with the lethal means to kill themselves, meaning it's the patient who employs them.

Some countries have also allowed passive euthanasia, which is the withdrawal or withholding of life-preserving treatments, at the request of the patient or a family member.

What is the general picture of assisted dying in the European Union?

Euthanasia is legal in five countries in Europe: Belgium, the Netherlands, Luxembourg, and more recently Germany and Spain.

The former two countries even recognise requests from minors under strict circumstances.

Assisted suicide, in which somebody is given the means to end their own life, has been legal in Switzerland since 1942 but active euthanasia is not allowed.

Other countries such as Austria, Finland, and Norway allow passive euthanasia under strict circumstances, where those suffering from an incurable disease can decide not to be administered life-prolonging treatments, such as artificial nutrition or hydration.

It's important not to confuse passive euthanasia with withdrawing life-sustaining treatment in the person's best interests. The latter can be part of palliative care and is not necessarily euthanasia.

France is not the only European country to be deep in debate about the issue. There has been a recent push for an assisted dying law in Ireland, but at present that has stalled.

One country that has come very close to legalisation is Portugal, with only two presidential vetoes stopping the passing of the law in the Catholic-majority country.

In June 2022, its parliament once again delivered a strong vote in favour of decriminalising the practice.

The end of the COVID pandemic is in sight, says WHO chief

Beyond condoms: How birth control is now becoming a male affair

Having this blood type may increase your risk of stroke