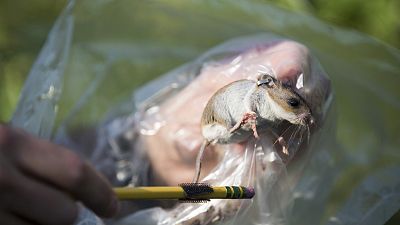 Whether we choose to fully acknowledge it or not, we are living in a so-called "era of pandemics," as experts have described it.

Outbreaks of zoonotic diseases - those caused by the spilling over of a virus from an animal to a human, like COVID-19 and monkeypox - are likely to emerge more often in the future, spread more rapidly and do more damage to the world than coronavirus did, according to a team of scientists who raised the alarm in 2020 with a major report.

The reason is our exploitative, invasive approach to the planet, which has led us to eat away at the land once dominated by wildlife, destroying biodiversity and forcing animals to find shelter and food somewhere else, often closer to humans.

This increased contact between wildlife and humans is a powder keg that could explode at any moment in outbreaks of several new, deadly diseases, experts warn.

But as not even the impending collapse of our climate can induce humanity to make a significant, immediate change in the way we treat our planet, some scientists are looking at what other solutions are available to avoid a future catastrophe.

Two biologists at the University of Idaho in the US have raised the question: if we know where these diseases might come from, why not act on their sources and vaccinate wildlife against these diseases?

How do we vaccinate wildlife?

"There are many ways you can go about vaccinating wildlife" Scott Nuisner, a Professor of Biological Sciences and one of the authors of a study on the topic first published in Nature, Ecology & Evolution in 2020, told Euronews Next.

"We already do this actually in North America and Europe to control rabies," he explained.

"For instance, in North America, we vaccinate raccoons against rabies by dropping vaccines that are in edible baits across the landscape, out of planes or helicopters. And the raccoons eat it and they become vaccinated against rabies. And, of course, that protects us and our livestock and our pets".

This solution has proven quite successful but Nuisner specified that, for it to work, you must have the right resources available - funds to fly helicopters around and pay for the baits - and a species that’s "long-lived".

"Raccoons are short-lived from our perspective, but they're very long-lived relative to something like a rodent," Nuisner said.

"If you vaccinate them, then that immunity sticks around for a while, whereas if you were to vaccinate something like a rodent population that might carry an infectious disease like Hantavirus or Lassa virus or any number of other nasty things, it's really hard to do because you vaccinate them using those kind of conventional baits, and you get decent immunity in the population, but they reproduce so rapidly that within a short amount of time the immunity you've established is washed out".

This problem led scientists to look for a vaccine that, instead of being administered directly to wildlife, could move from animal-to-animal.

A transferable vaccine is applied directly on the skin or fur of the animal, who’s then returned to its colony.

"So, that when its friends groom it, lick it, clean it - in a behaviour called allogrooming that's common amongst many different kinds of mammals - that vaccine moves to the next animal," said Nuisner.

"There's nothing different about that vaccine than what we already use. It's not capable of self-replication; it's just that the way you apply it allows it to move from one animal to the other".

There are these potential advantages to the wildlife as well: if you can eliminate the rabies [in bats], it reduces the incentive to go out and just kill the reservoir.

According to Nuisner, that's something we can do right now and that people like Daniel Streicker, a disease ecologist at the University of Glasgow, have been already testing.

In 2017, Streicker and his team travelled to Peru to test transferrable vaccines for rabies on vampire bats.

They located three colonies, each with 200 animals, and proceeded to smear the back of 20 to 60 bats for each colony with a gel containing a biomarker that made the animal’s fur fluorescent.

Days later, the scientists saw that some 84 per cent of the bats in all three colonies were glowing, proving that the animals have transferred the vaccine to each other.

Self-disseminating vaccines, on the other hand, are much more complex. They consist of live modified viruses designed to propagate a weakened form of a disease within the animal population, thereby spreading immunity.

"We bring that back to the lab and we put into it a little piece of the genome of the target pathogen, and then we put that back into the rodent.

"And when we do that, the hope is that it will transmit from rodent to rodent and establish immunity in each rodent against the target pathogen so that we can control it in the rodent population so that it never spills over into people".

Advantages for animal populations, too

Are these solutions already available? “In terms of implementation [of these vaccines], we’re still way out,” according to Nuisner.

Transferrable vaccines could be implemented immediately, but there’s a wider lack of funding and interest in it. But self-disseminating vaccines aren’t ready yet, as the technology is still in the laboratory environment.

"None of those have even been moved to the stage of a field trial, as far as I'm aware," he said.

Vaccinating wildlife could help animals as well as people, says Nuisner, reducing the chances that they are blamed for the spread of diseases.

"The way they control rabies from vampire bats in South America often is just to kill the bats," he said. "So, there are these potential advantages to the wildlife as well: if you can eliminate the rabies, it reduces the incentive to go out and just kill the reservoir".

After the outbreak of COVID-19, experts reported a viral witch hunt against bats, which are natural reservoirs for coronaviruses, and the World Health Organization (WHO) has recently condemned attacks against non-human primates in Brazil amidst the spread of monkeypox.

A former hacker wants to stop others like him. The law won't allow him

What is 'cashstuffing,' the latest money-saving TikTok trend?