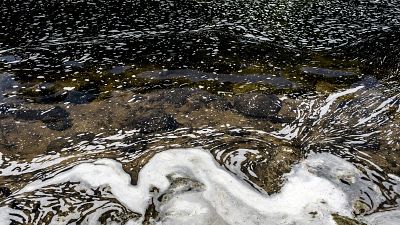 Forever chemicals, which don’t break down in the environment, accumulate in the soil and waterways, contaminating them.   -   Copyright  Jake May/Flint Journal via AP
By Giulia Carbonaro  •  Updated: 21/08/2022

Scientists believe they found a solution to ripping apart so-called "forever chemicals" - human-made chemicals known as PFAS - which are now believed to be pervasive around the world.

"Forever chemicals" don’t normally occur in nature and don’t break down in the environment, posing a risk to human health as well as to wildlife.

While there are already some solutions available to break some of these chemicals apart, these are often very expensive, energy-intensive processes involving intense pressure or extremely high temperatures up to 400 degrees Celsius.

But now, experts think they found a solution that’s already available in most chemistry labs around the world: sodium hydroxide, also known as lye, and dimethyl sulfoxide, or DMSO, a solvent that is often used in medicine to reduce inflammation and pain.

A team of scientists at Northwestern University in Illinois, the US, found that the two compounds were able to degrade one major type of "forever chemical," known as perfluoroalkyl carboxylic acids, or PFCAs, which contain carboxylic acid and are commonly found in water-resistant clothes.

The study, published on August 18 in the journal Science, believes it has found the "Achilles' heel" of "forever chemicals": instead of trying to break PFCAs’ carbon-fluorine bonds, the strongest in organic chemistry, the scientists targeted just the charged oxygen atoms at the end of these molecules.

Heating the PFCAs in DMSO and lye, the scientists essentially “decapitated” the molecule, leaving behind fluoride, the safest form of fluorine.

"Although carbon-fluorine bonds are super strong, that charged head group is the Achilles’ heel," said chemist William Dichtel, who led the study.

What are 'forever chemicals'?

PFAS stands for per- and poly-fluoroalkyl substances, a large family of human-made chemicals that, because of their non-stick and stain repellent properties, have been used in the manufacturing of household items - like food packaging, electronics, cosmetics, and cookware - as well as water-resistant clothing and firefighting foams since the 1940s.

Because they don’t break down naturally in the environment, these chemicals accumulate in soil and water and remain in the human body once ingested.

How harmful are they?

Experts are not exactly sure yet about the true impact of "forever chemicals" on people’s health. But there’s no doubt these substances are having a major impact: a 2015 study found that this type of chemical was present in the blood of 97 per cent of the American population.

Other studies linked the chemicals to thyroid diseases, high cholesterol, cancer, and fertility problems, as well as developmental delays in children.

Recently, new research found that rainwater everywhere on the planet is unsafe to drink because of the levels of “forever chemicals” present in it.

What does the new study mean?

But while this is welcome news, the findings only apply to 10 types of PFAS out of 12,000 that have been identified so far.

But Dichtel is hopeful more solutions can be found to eliminate the threat of forever chemicals.

"Our work addressed one of the largest classes of PFAS, including many we are most concerned about," he said.

"There are other classes that don’t have the same Achilles’ heel, but each one will have its own weakness. If we can identify it, then we know how to activate it to destroy it".

This company wants to use 3D printing to help rebuild Ukraine