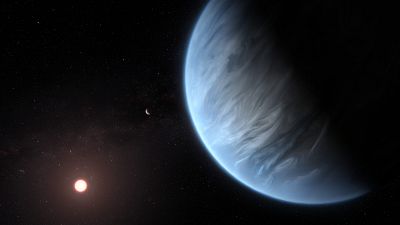 Evidence of water vapour in the atmosphere of an exoplanet caused widespread excitement in 2019, signalling the first discovery of a key element for life on a planet in a “habitable zone” outside of our solar system.

A new study, however, suggests that vapour found on the planet named K2-18b may not be the life-supporting h20 but methane.

K2-18b is an exoplanet - a planet discovered outside of our galaxy - eight times the mass of Earth, earning it the descriptors “super-Earth” or “mini-Neptune”.

The supposed discovery of water vapour was especially exciting as the planet orbits its star in the so-called “habitable zone” - neither too close nor too far from its star to potentially support life.

A 2019 study using observations from the Hubble Space Telescope analysed light filtered through the planet’s atmosphere, with results revealing a molecular signature of water vapour.

However, a study published on May 12, which re-examined the same data, suggests the vapour may be from methane.

"There may be water vapour around K2-18 b, but for the moment we are not sure," Bruno Bézard, an astrophysicist at the Paris-PSL Observatory and one of the study’s authors, said.

The study, published in Nature Astronomy, used a different model to that of the 2019 study, and found the signals recorded "could very well be due to methane".

Bézard questioned why the 2019 study ruled out any scenario in which the atmosphere contained methane, a gas made up of carbon and hydrogen.

"It is not clear why they favoured models where there is no methane," he said.

The debate over whether there is water vapour in K2-18b’s atmosphere may be settled soon, as the James Webb Space Telescope (JWST) goes into service.

The JWST is the successor to Hubble, and a powerful upgrade.

It was successfully launched into space in December last year, and completed its journey to its observation orbit 1.5 million km from Earth in January, and is now almost ready to start revealing some of the deep mysteries of the universe.

Time has already been scheduled to observe the atmosphere of K2-18b, according to Bézard.

"With this, we will be able to determine whether there is indeed water vapour and in what proportion," he said.

Even if water is found to be present on K2-18b, humans won’t be travelling there.

It orbits a red dwarf star in the constellation Leo, which lies some 100 light years from our solar system.

But the discovery would give us important information on just how rare the conditions for life to survive are in the Milky Way.

One giant leap for mankind on Mars by 2030? SpaceX thinks so

After 47 years, the Mediterranean Games return to Algeria