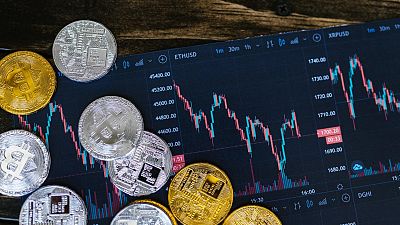 The value of the largest cryptos Bitcoin, Tether and Ether all experienced a fall in value on Monday.   -   Copyright  Canva
By Reuters  •  Updated: 16/05/2022

Cryptocurrencies resumed their slide on Monday, giving up the gains they had eked out over the weekend as regulators continued to circle.

Bitcoin fell 5 per cent to around $29,700 (€28,500) on Monday in Asian trade, sliding alongside stocks because of worries about high inflation and rising interest rates.

The world's largest cryptocurrency has lost around a fifth of its value so far this month, as the spectacular collapse of TerraUSD, a so-called stablecoin, has roiled crypto markets already falling amid a broad selling of risky investments.

TerraUSD, which broke its 1:1 peg to the dollar last week and is currently trading near $0.14 cents (€0.13), according to price site coingecko, has drawn particular attention to stablecoins and the important role they play in the crypto system.

Some of that attention has come from financial regulators.

The Governor of the Bank of France, Francois Villeroy de Galhau told a conference on Monday that crypto assets could disrupt the international financial system if they were not regulated and made interoperable in a consistent and appropriate manner across jurisdictions.

He pointed to stablecoins, which he said were somewhat misnamed, as among the sources of risk.

Speaking separately, Fabio Panetta, member of the executive board of the European Central Bank, also said on Monday that stablecoins were vulnerable to runs.

Tether, the world's largest stablecoin, briefly lost its 1:1 peg on May 12, before recovering. Unlike TerraUSD, Tether is backed by reserves in traditional assets, according to its operating company.

Regulators elsewhere are also concerned. The US Federal Reserve warned last week that stablecoins were vulnerable to investor runs because they were backed by assets that could lose value or become illiquid in times of market stress.

After 47 years, the Mediterranean Games return to Algeria