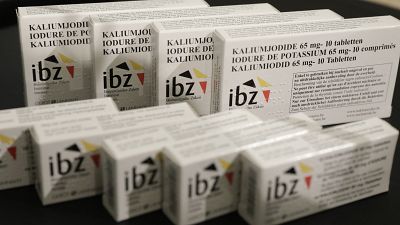 People across Europe are stocking up on iodine tablets amid fears of a nuclear fallout from Russia’s war in Ukraine.

Pharmacies across at least nine EU countries say they have seen a surge in demand since Russian President Vladimir Putin ordered nuclear deterrence forces on high alert and fighting broke out on the sites of two of Ukraine's nuclear plants, Chernobyl and Zaporizhzhia.

The French foreign minister Jean-Yves Le Drian also announced on Sunday that France had sent Ukraine iodine tablets - among other medical products - to help the country protect its citizens in the event of a nuclear accident during fighting with Russian forces.

Nuclear medicine experts say the pills should only be taken at the guidance of public health experts.

The Belgian Pharmacists' Union told the Belga news agency that over 30,000 boxes were distributed last Monday alone. Belgian pharmacies are dispensing the tablets for free to those with a Belgian identity card.

It’s a similar story in Finland and the Netherlands with demand jumping since the start of the war. Some pharmacies even went out of stock, but the Finnish Association of Pharmacists said there was no need to hoard the tablets as there were plenty of supplies.

Anxiety is also rife across central Europe, with a similar rush to buy iodine in Poland and Romania, which share a border with Ukraine, as well as in the Czech Republic, Croatia, and Bulgaria.

"In the past six days Bulgarian pharmacies have sold as much [iodine] as they sell for a year," the chair of the country's pharmacies union said on Wednesday.

"Some pharmacies are already out of stock. We have ordered new quantities but I am afraid they will not last very long".

How do iodine pills work?

Iodine tablets can be taken to reduce the risk of developing thyroid cancer in the event of a nuclear accident, according to the Norwegian Radiation and Nuclear Safety Authority.

Radioactive iodine released during such an event can be absorbed by the thyroid gland when inhaling contaminated air, but iodine tablets help stop this absorption and as a result reduce the risk of developing thyroid cancer.

In 2011, Japanese authorities recommended that people around the site of the damaged Fukushima nuclear power plant take iodine.

However, the US Nuclear Regulatory Commission notes that it is a "very specialised protection".

"Evacuation is the most effective protective measure in the event of a radiological emergency,'' it says.

"Because it protects the whole body (including the thyroid gland and other organs) from all radionuclides and all exposure pathways".

Should I take iodine tablets now?

Experts caution that iodine, which is typically distributed to populations living within 15 to 20 km of a nuclear facility in the event of an incident, is not necessary at this stage and would not help in case of nuclear war.

"To what extent iodine tablets would be helpful against the effects of nuclear bombs is at the very least questionable," Dr Hielke Freerk Boersma, a radiation protection expert at the University of Groningen told Euronews Next.

"The direct effects of nuclear explosions will be disastrous. At large distances, where fallout will presumably dominate, radioactive contamination will certainly not only be caused by radioactive iodine".

“The unnecessary use of iodine tablets - that might happen when people panic - might also give rise to adverse health effects, albeit that the chance of these effects to occur, is very small”.

"The current situation in #Ukraine does not require taking tablets," it said on Twitter.

"They remain available free of charge in pharmacies, but are not necessary in this specific case. Only take iodine on the recommendation of the authorities".