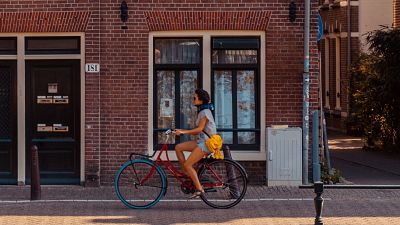 Rapid delivery's rapid rise has led to tensions between companies and the cities they operate in   -   Copyright  Francois Genon / Unsplash
By Tom Bateman  •  Updated: 24/02/2022

Noise, reckless cycling and blacked-out windows are some of the reasons rapid delivery services like Gorillas, Getir, Flink and Zapp have clashed with residents in cities across the Netherlands.

Now, one rapid delivery service has accused Dutch city officials of breaking EU law after they imposed a year-long ban on new "dark stores" - the virtual supermarket warehouses that allow high-speed delivery of groceries and other household goods.

Last month, city councillors in Amsterdam and Rotterdam voted to freeze development of dark stores following complaints prompted by the speed of growth of the rapid delivery services during the pandemic.

Now, other Dutch cities are set to follow their example, with moves to restrict the delivery apps underway in 23 other municipalities, according to the Dutch newspaper NRC.

Berlin-based Flink told Euronews Next it was "evaluating all options, including legal action" in response to the freeze.

Amsterdam and Rotterdam's "restrictions on the freedom of services must meet the conditions of non-discrimination, necessity, and proportionality, which they do not in our opinion," the company said.

Two years ago, there were no rapid delivery services in the Netherlands. German startup Gorillas entered the Dutch market in December 2020. It was followed by competitors Getir, Flink and Zapp in 2021.

Now, the four companies compete with each other to deliver food and other items to customers within 10 minutes, ballooning the number of rapid delivery customers from 200,000 in early 2021 to around 700,000 now, according to an analysis by Kantar.

Dark stores are crucial to their business model. In an industry where speed is king, putting the distribution centres in residential areas, closer to their customers, provides a clear advantage. It's also at the heart of the problem.

We try to prevent empty or vacant shops to keep shopping streets lively and to create a natural 'flow' from shop to shop. A dark store with blinded windows, causing unsafe traffic and nuisance, does not contribute to that.

"From the moment the first dark stores settled in busy residential areas or shopping streets in the spring of 2021, complaints by residents and surrounding shop keepers started to reach us," Tristan van Rijn, spokesperson for Rotterdam politician Roos Vermeij, told Euronews Next.

"We try to prevent empty or vacant shops to keep shopping streets lively and to create a natural 'flow' from shop to shop. A dark store with blinded windows, causing unsafe traffic and nuisance, does not contribute to that," he said.

From the city's perspective, the one-year freeze is a way to slow development and allow regulations to catch up, he said.

"We will use this period to come up with a new set of rules and a new zoning plan to regulate where dark stores may settle, and where they may not. This freeze does not focus on the concept of dark stores, but on their locations".

The basic issue, according to van Rijn, is that dark stores exploit a "blind spot" in urban planning rules.

A dark store acts as a small-scale distribution centre, generating traffic and other activity around it. But in Rotterdam, rapid delivery firms were able to set up dark stores in areas zoned for retail uses like shops and supermarkets.

"In our view, this is indeed a case of legislation not keeping up with new market concepts," van Rijn admitted.

Before opening a new store, a supermarket chain must apply for a permit and agree to work only during fixed operating hours, he said. Dark stores, on the other hand, are able to run 24/7. They can pop up without permits or restrictions.

This has fuelled conflict between the rapid delivery companies and their potential customers, and even led residents of one street in Amsterdam to start a petition against a dark store that opened in the garage of an apartment building.

For their part, the companies contacted by Euronews Next acknowledge that the speed of the industry's growth has caused some friction.

"At the same time, we’re noticing an increased dissatisfaction in some neighbourhoods. We grew incredibly fast in year one and growth naturally goes hand in hand with growing pains," she said.

We see Amsterdam and Rotterdam’s responses as extreme and unconsidered reactions. We believe the decisions of these municipalities are unlawful, since they violate EU law.

Despite these "growing pains," Davidson said that Flink opposed the freeze imposed by Amsterdam and Rotterdam.

"In some municipalities, drastic decisions were taken. This happened in municipalities Amsterdam and Rotterdam while the municipality aldermen never reacted to our invitations to meet," she said.

According to van Rijn, "some of the companies were willing to speak with [Rotterdam officials] and some of them did not at all".

"We see Amsterdam and Rotterdam’s responses as extreme and unconsidered reactions. We believe the decisions of these municipalities are unlawful, since they violate EU law. Restrictions on the freedom of services must meet the conditions of non-discrimination, necessity and proportionality, which they do not in our opinion," Davidson said.

In response, van Rijn told Euronews Next that a temporary freeze was well within the city's rights to impose.

"A freeze like this is a lawful instrument to prepare a new zoning plan and has been agreed with by the city council. This instrument has been used many times before," he said.

Other rapid delivery companies affected by the freeze told Euronews Next they were also aware of potential issues with their neighbours in the Netherlands.

"We carefully pick the location of our stores and deliver with 100 per cent electric vehicles, creating no nuisance," Turkey-based Getir said.

"We will continue to adopt a constructive position at all times and are happy to discuss with municipalities how things could be improved," Gorillas said in a statement.

Both companies said they welcomed the opportunity to speak to municipalities in the Netherlands in order to develop a new policy on dark stores together.

The other pandemic: Obesity set to hit 1 billion people by 2030

Cut off for 5 weeks, this is what it took to restore Tonga's Internet

Fact check: Is Queen Elizabeth’s COVID being treated with ivermectin?

Are floating cities the future of coastal living?