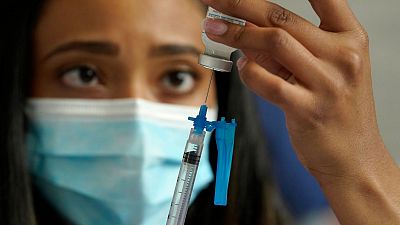 A new study suggests that some people's COVID vaccine side-effects could be down to the nocebo effect.   -   Copyright  AP Photo
By Ian Smith  •  Updated: 19/01/2022

More than two-thirds of the common side effects people experience after a COVID-19 vaccination can be attributed to the “nocebo effect” rather than the vaccine itself, according to a new study.

The "nocebo effect" is just like the placebo effect - the well-known phenomenon of a person's physical or mental health improving after taking a fake treatment - but the outcome is negative rather than positive.

They analysed data from 12 clinical trials of COVID-19 vaccines, which included adverse effects reports from 22,578 placebo recipients and 22,802 vaccine recipients.

"Nonspecific symptoms like headache and fatigue – which we have shown to be particularly nocebo sensitive – are listed among the most common adverse reactions following COVID-19 vaccination in many information leaflets," the study’s senior author Dr Ted J Kaptchuk, professor of medicine at Harvard Medical School, said in a statement.

"Evidence suggests that this sort of information may cause people to misattribute common daily background sensations as arising from the vaccine or cause anxiety and worry that make people hyper-alert to bodily feelings about adverse events," Kaptchuk added.

What was the impact of the nocebo effect?

After the first injection, more than 35 per cent of placebo recipients experienced systemic adverse events – symptoms affecting the entire body, such as fever – with headache and fatigue the most common at 19.6 per cent and 16.7 per cent respectively.

A further 16 per cent of placebo recipients reported at least one local event, such as pain at site of injection, redness or swelling.

In comparison, after the first injection, 46 per cent of vaccine recipients experienced at least one systemic adverse event and two-thirds of them reported at least one local event.

While this group received an active vaccine, at least some of their adverse events are attributable to the placebo – or in this case, nocebo – effect, given that many of these effects also occurred in the placebo group.

The researchers’ analysis suggested that the nocebo effect accounted for 76 per cent of all adverse events in the vaccine group and nearly a quarter of all local effects reported.

The study also noted that incidences of side effects were lower in the placebo group after the second dose but were higher in those that actually received the vaccine.

Is it better not to inform patients about side-effects?

While some researchers argue that patients should be told less about the potential side effects of a vaccine, Kaptchuk believes it is ethically necessary to fully inform participants.

"Medicine is based on trust," he said. "Our findings lead us to suggest that informing the public about the potential for nocebo responses could help reduce worries about COVID-19 vaccination, which might decrease vaccination hesitancy".

Hong Kong to kill 2,000 small animals after hamsters get COVID-19