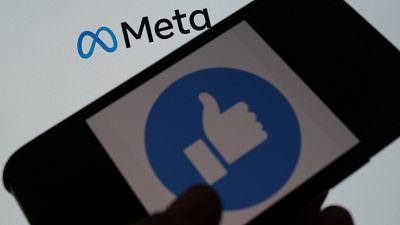 This illustration photo taken in Los Angeles on October 28, 2021, shows a person using Facebook on a smartphone in front of a computer screen showing the META logo   -   Copyright  CHRIS DELMAS/AFP
By Pascale Davies  •  Updated: 14/01/2022

In another swipe at Facebook, a multi-billion euro case is set to be launched against the social media giant in the United Kingdom, which could see up to 44 million UK Facebook users receiving a shared £2.3bn (€2.7bn) in damages, a competition expert claims.

The class acton lawsuit against Meta, the company which changed its parent name from Facebook last year, is being launched by competition expert Dr Liza Lovdahl Gormsen.

She alleges Facebook abused its market dominance by imposing unfair terms and conditions on UK users to exploit their personal data.

Gormsen alleges Meta set an “unfair price” for UK Facebook users because they traded their data for access to the network for free while the social media giant generated billions in revenue from its users’ data.

She argues this “unfair deal” was only possible due to Facebook’s market dominance.

“Facebook is dominant in the market, the social network, so they have a special responsibility,” Gormsen told Euronews Next.

“I don't think exploiting users is having a special responsibility to behave in a way as if you are not dominant. They do it because they can, and somebody's got to stop that.”

A pre-action letter has been sent to Meta with a claimfor a minimum of £2.3 billion in damages on behalf of affected UK Facebook users who used the social media platform between October 1, 2015 and December 31, 2019.

How has Met responded?

“People access our service for free,” a Meta spokesperson said in an email statement to Euronews Next.

“They choose our services because we deliver value for them and they have meaningful control of what information they share on Meta’s platforms and who with. We have invested heavily to create tools that allow them to do so.”

Meta has made social networks less competitive after it acquired Instagram and WhatsApp, with the company coming under global pressure for dominating the market.

Meta is currently facing an antitrust suit from the US Federal Trade Commission (FTC).

A judge ruled on Tuesday that the FTC’s antitrust lawsuit was allowed to go ahead after its first attempt at targeting the company's alleged monopoly was dismissed due to lack of evidence.

But this time, the judge found Meta’s strategy involves a "buy or bury" mentality, especially since acquiring Instagram and WhatsApp.

If we have to sit and wait for competition authorities to take action and then have a follow up action from a decision from them, then that can take many, many, many years. And I think that that we've already waited long enough.

Despite recent action over Meta’s market dominance, Gormsen argues competition authorities have focused for too long on whether a company was excluding competitors and not on consumers.

“I think for very long time, consumers haven't been the centerpoint of hasn't been the centre point of competition law and I think it's time now that that that that they get in the middle of these things and get compensated for what has happened in the past because they are the ones that are being exploited,” she said.

“If we have to sit and wait for competition authorities to take action and then have a follow up action from a decision from them, then that can take many, many, many years. And I think that that we've already waited long enough.”

Gormsen argues that Facebook collected data within its platform and through off-platform mechanisms like Facebook Pixel. The company could then generate deep data profiles of users.

People access our service for free. They choose our services because we deliver value for them and they have meaningful control of what information they share on Meta’s platforms and who with.

She claims due to its market dominance, Facebook could impose terms and conditions on UK users which allowed it to harvest their data.

Not only did this create profits for the company but the user profiles also repeatedly resurfaced in controversies such as the Cambridge Analytica scandal.

How wil the case work?

The class action case argues that Meta broke the UK's 1998 Competition Act.Gormsen will represent those affected, all people in the UK who used Facebook at least once between the period of 2015-2019.

The opt-out case means users do not need to join the case to seek damages but will be a part of the claim unless they decided to opt-out.

Gormsen’s lawyers have written to Meta to notify them of the claim.

Will the EU regulate the metaverse? It's looking likely

Facebook lost daily users for the first time ever. Here's why

The UK launches a second probe into Google’s ad practices

Which countries are using monkeypox vaccines?