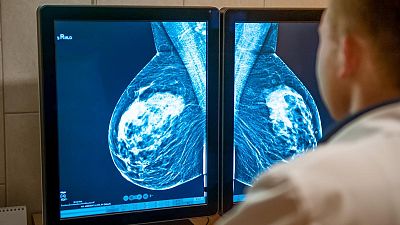 Cancer care has been severely impacted across Europe because of the COVID pandemic.   -   Copyright  Canva
By David Walsh  •  Updated: 02/12/2021

While our attention was focused on the unfolding global health crisis precipitated by the spread of COVID-19, Europe was sleepwalking into yet another deepening health crisis.

The 'Time to Act' Data Navigator, a new tool created by Queen’s University Belfast in the UK and European Cancer Organisation, has uncovered the scale to which treatment for cancer has been disrupted by the pandemic.

The aggregated data - compiled from 200 sources in 17 European countries initially - indicates that an estimated 100 million screening tests were not performed while up to half of all cancer patients were affected by treatment delays. What’s more, as many as 1 million Europeans could be living with undiagnosed cancer.

Given the nature of the virus, hospitals and medical centres across the continent were forced to delay or cancel treatment and surgeries to minimise the risk of vulnerable and ill people being exposed to the disease, particularly cancer patients.

The toll the pandemic has exacted on not just cancer care, but also the treatment of other diseases, is not yet known. However, researchers hope the data will give a fuller picture of what the virus’ legacy will be.

The disastrous impact of COVID-19 on cancer patients and cancer services cannot be ignored. Cancer patients cannot wait, and we must ensure that Covid-19 does not continue to undermine the fight against cancer.

"While COVID-19 exposed significant gaps in our healthcare systems, the overall impacts of COVID-19 on cancer care delivery across European countries is as yet unknown," said Mark Lawler, a Professor of Digital Health at Queen’s University Belfast and Co-Chair of the European Cancer Organisation’s Special Network on the Impact of COVID-19 on Cancer.

"We developed a user-friendly data tool that will help to assess challenges and inequalities in cancer care delivery that European countries experienced during the pandemic," he added.

"The disastrous impact of COVID-19 on cancer patients and cancer services cannot be ignored. Cancer patients cannot wait, and we must ensure that Covid-19 does not continue to undermine the fight against cancer".

These are just some of the key insights gathered by the Data Navigator.

A two-month suspension of early breast cancer screening meant that the number of screening procedures carried out in April and May 2020 dropped 70 per cent compared to the same period the year before. New diagnoses of breast and gynaecological cancers dropped by half in April 2020 compared to 2019.

Belgium was one of the hardest-hit countries during the first wave of COVID-19. The disruption the arrival of the virus caused to cancer services in the country was also severe, with a decrease of 81 per cent in cancer screenings, and a further 44 per cent reduction in cancer diagnoses. Around 11 per cent of cancer patients faced delays to their chemotherapy treatment and as of August 2021, there were still 4,000 outstanding cancer diagnoses to be confirmed.

As the first wave of the pandemic hit, cancer diagnoses dropped by 42 per cent in April 2020 compared to the previous year. According to the data submitted to the research team behind the Data Navigator, there were an estimated 93,000 undiagnosed cancer cases in 2020 alone. In terms of treatment, France faced a surgery backlog of 60 days with a 200-day backlog for chemotherapy.

For 35 days in March and April 2020, there were no invitations sent out to women to come for mammogram examinations as COVID-19 swept Germany. At the same time, new cancer diagnoses fell by over 27 per cent in April 2020 compared to the year before. During the early stages of the pandemic, 46.4 per cent of cancer patients reported difficulty in confirming dates for investigative procedures like biopsies and surgeries as well as hospital stays.

In Ireland, the data is particularly compelling for prostate cancer. Cases detected in 2020 had fallen to 67 per cent of levels recorded in the previous year, with referrals for treatment at prostate cancer clinics in August 2020 having dropped by 26 per cent of normal levels. While detected cases of lung and breast cancer saw only a slight drop to 95 and 98 per cent of previous levels respectively, the number of biopsies carried out dropped by nearly half.

In Italy, the majority of patients saw their care disrupted in some way, with 84 per cent saying their course of treatment had changed in one way or another during the pandemic. Some 52.5 per cent of lung cancer patients, for instance, faced delays to their chemotherapy treatment. Women typically waited an additional 4.4 months on average for cervical cancer screening. The number of surgeries also dropped across the board, with the number of colon cancer operations dropping the steepest by a third compared to 2019.

In Poland, all forms of treatment were impacted by the pandemic, but breast cancer services, in particular, saw a reduction. For example, the number of mammograms performed in April and May 2020 fell by 94 per cent as compared to 2019.

Data from Romania is so far limited but of what the Data Navigator had access to, researchers found that 77.5 per cent of cancer patients had difficulties attending required medical services and appointments during the pandemic while hospital admissions for cancer patients dropped by 61 per cent.

Compared to the pre-pandemic period, 38 per cent of lung cancer cases in Spain went undiagnosed in 2020. Screening for solid tumours dropped by over half with 57 per cent fewer cytologies, or screening tests, being carried out in 2020 compared to the previous year while tumour biopsies dropped by 41 per cent. There was a 30-day backlog for surgeries to treat colorectal cancers in 2020.

According to data provided by Macmillian Cancer Support, nearly a million people experience some disruption to their treatment because of COVID-19. Breast cancer screenings were particularly hard hit with an estimated 986,000 cancelled appointments, according to the charity Breast Cancer Now.

In April 2021, there were 4.6 million people awaiting surgeries with 300,000 of those having waited more than a year to be operated on. Arguably the worst data concerns the rise in mortality, with increases noted across all cancer types. There was, for instance, a 9.6 per cent increase in the number of deaths for breast cancer patients whose diagnosis was made within the last five years.