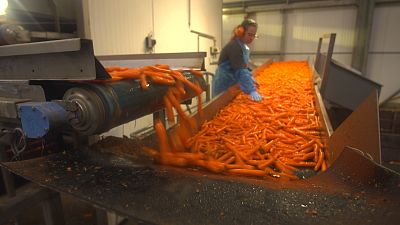 An enormous 20% of all food produced in the European Union ends up either in landfill sites or as animal feed. It's an expensive waste of a potential resource that costs the economy €140 billion a year.

Experts say solving this problem requires a combined, joined-up effort; they believe that in doing this, everyone from producers to consumers will be able to bring something to the table - and all will benefit.

Futuris has been investigating the current strides being taken toward creating that joined-up system and helping reduce food waste - which is one of the aims of the EU's Farm to Fork Strategy.

Damaged carrots are often used to feed cattle, but the long-established vanRijsingengreen family business, based at Helmond in the Netherlands, considers even that use to be just another form of waste.

vanRijsingengreen takes a different approach; what the company can't sell as fresh snacks or peeled carrots for use in the food industry, it turns into juice and powdered ingredients. What it's producing at any given moment is continuously adjusted, based on both the supply and the demand.

"What we are trying to do is to make optimised planning for both industry, the fresh market and the ingredients market.

"Now we try to use all the ingredients — we have vegetables, we make juice, we have pulp as a sidestream and we try to use the fibre out of that."

The nearby Surplus Food Factory also endeavours to use cheap by-products from the food industry, turning them into a valuable raw material.

It's Director and Founder Bob Hutten explains what they use:

"These tops and bottoms of tomatoes are rejected by hamburger manufacturers.

"We get them and make tasty sauces and soups. We also use, for example, carrots that are too big for the food industry and for retail."

Bob wants other producers to pick up tips from their methods:

"I would invite people from other countries to come here and see what we’re doing.

"I would advise them, help them to see where the pitfalls are and to use the lessons learned by our factory — so that every country could have (similar) food producers."

vanRijsingengreen and the Surplus Food Factory are just two of the many cases studied by the European research project REFRESH across five different countries.

The project has examined how private and public stakeholders can work together to turn food waste into worthwhile commodities.

"What we see is not a one-size-fits-all solution, but it helped us to make a kind of blueprint where we could help any country in Europe and outside to learn from what _we_ have learnt - and also to help in building these negotiated agreements with the different stakeholders in the supply chain."

New technology could also play a crucial role. Orbisk, a Dutch startup company, has developed an automatic camera for restaurant kitchens: it keeps photographic track of everything that goes into the bin, providing detailed statistical analysis of the waste of food that could have been prevented.

Olaf van der Veen, Orbisk's CEO, says its service can save restaurants seven times the amount of money that it costs:

"They will see the recurring loss and can decide to buy less or produce less of particular items in order to prevent them going into the waste bin (in future).

"We see that on average, every monitor has the potential to save 4,000 kilos of food every single year. So (just) imagine if we apply this technology at scale!"

Many Dutch supermarkets sell products that are nearing their expiry date for a fraction of their original price, in the popular 'Surprise Box' format.

The Jumbo Verberne supermarket franchise also tackled the daily fresh bread surplus by partially replacing it with a frozen alternative that tastes just as good when it comes out of a toaster.

George Verberne, the franchise's owner, says it was an important step:

"Now there's always bread available, from early morning to late evening. It's a win-win solution: you waste less bread and you serve your customer better."

Screening, research and treatment: the EU's mission to beat cancer

Nestore, the new personal coach to keep you fit in mind, body and soul

Climate change affects our health: how can society adapt?