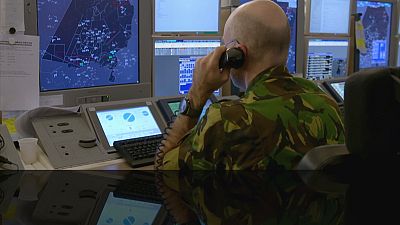 How can military and civil airspaces be better coordinated to keep flights over Europe safer? To find out, we’re at this military base in the Netherlands, a country whose airspace is one of the more dense and complex in the world.

The station shares its data with, and gets access to, civil aircraft tracks and flight plans over Belgium, the Netherlands and Luxembourg and also parts of Germany.

“The system reduces the room for misunderstanding. Now they [civil flight controllers] look at the system,” explained Rob van Harten, Supervisor of military air traffic control, Royal Netherlands Air Force. “So everything that I put in, that should be correct and it is correct, they can see it correctly. This goes for flight plans, but also for activation or deactivation of military areas. So we can tell them (note: civil flight controllers) in time and put it in the system, and that always should be the same. And if it isn´t (note: so if there is any problem), it would be filtered out very quickly.”

Experts here at the Maastricht Upper Area Control Centre developed the automation system, that is shared by different service providers.

A closer understanding between civil and military controllers that is said to increase safety and efficiency on European skies.

“The operations that we are doing are what we call ‘real-time operations.’ So what you see on the screen is what is happening real-time,” Peter Naets, Head of Engineering, Eurocontrol Maastricht, told Euronews. “And of course if you start to remote the technical services at a certain distance, there is going to be a time slack. And the question is whether that is going to be acceptable for controllers. But with modern technologies that is no longer a limitation.”

The project has been expanded to a civil airspace a thousand kilometers away from the Netherlands.

We are at Ljubliana airport, in Slovenia.

Last year hundreds of thousands of flights were controlled from Slovenian airspace.

Controllers show just how feasible the system is.

And increased safety is not the only good expected outcome.

“Cost-efficiency, by reducing the size of the existing services, by optimisation of the system elements that are currently used in Europe, will definitely reduce the size of investments needed, as well as reduce the maintenance and further development costs of the system. Which of course, should as well consequently link to a possible reduction of the air tickets for normal passengers,” said Ziga Ogrizek, Head of International Affairs, Slovenian Control.

If everything goes to plan, Slovenian controllers say the system could be fully implemented in Slovenia by 2021.

Global Skies: The take-off of flights in Morocco

On time - all the time. Helping to minimise airline delays