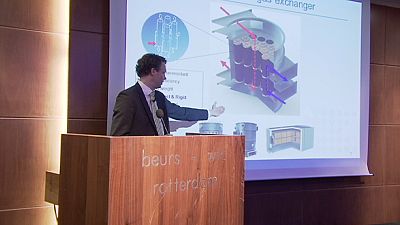 Traditionally Rotterdam is the industrial heart of the Netherlands, but these days the city has branched out into culture, design and tourism. It also focuses on the environment. The city hosted the 2014 Cleantech Summit, focusing on issues including clean industry, energy efficiency, clean energy, water, and air.

All the above are present in Rotterdam and project leaders arrive here in droves looking for investors in a sector which has regained its confidence.

“In the Rotterdam Region we have 2000 companies in CleanTech providing 13,000 jobs (but it’s true of course) we have a large port and a large industry and we are looking for new activities in CleanTech to go from the fossil economy to the new economy,” explained Maarten Struijvenberg Vice mayor Employment and Economy.

Isabelle Schirmer, Investor and Senior Consultant explained: “It is a sector that has suffered recently because many investors have got their fingers burned in CleanTech. But this year there has been a recovery in terms of the volume of investment flows. These days most start ups seeking funding are much more professional.”

In front of the grand financial jury, fifty entrepreneurs are looking for funds. They have just six minutes to pitch their company and potential profitability.

A key element of the summit, an initiative of “Tech Tour” and “International Venture Club”, is a circular economy rather than linear, which generates waste and losses. A circular economy is greener, because waste solutions are built into production.

In the nearby port of Rotterdam, the largest in Europe, electronic noses (e-noses) are sniffing around the 40 km installation and patrol boats are also equipped with them.

The e-nose sniffs out unpleasant and potentially dangerous smells. Mariëlle van Dijk is the project manager for sustainability at the Port of Rotterdam: “It’s like an early warning system so we can react much faster when something is happening, and also companies and industries themselves can react much faster. It detects smells using four different sensors which produce kind of “smell fingerprints” and there is a central library with different “fingerprints” and it can compare those fingerprints and sometimes it can say it’s this or that gas.”

Building a business whatever your gender: Dubai's drive to empower women entrepreneurs

Beyond the pandemic: the outlook for European small business