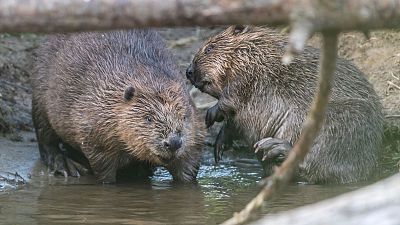 Beavers are now a protected species in England, 400 years after they were hunted to extinction.

As of 1 October, it is illegal to deliberately capture, injure, kill or otherwise disturb the industrious rodents, which have reclaimed a foothold in their native land in recent years.

While celebrating this historic day, environmental groups have expressed concern that the beavers’ newly-won European protected species status is itself under threat from the UK government.

“Changing the legal status of beavers is a game-changer for these amazing eco-engineers, which benefit both other wildlife and people,” says Joan Edwards, director of policy and public affairs at The Wildlife Trusts, which has pioneered their reintroduction.

“However, it’s extremely worrying that last week’s government announcements mean that their new legal status could now be reviewed - alongside all the other vital laws which protect nature.”

What does England’s new protection for beavers mean?

There are thought to be hundreds of Eurasian beavers living wild in England, mostly in the south west where they are making valuable improvements to waterways.

This follows a successful reintroduction by Devon Wildlife Trust on the River Otter in 2015 - as well as a number of unlicensed releases. But most of the population are living in enclosures, and that’s not set to change any time soon, explains the Beaver Trust’s Elliot McCandless.

The charity is waiting on further guidance from the government but understands that landowners will need a wild release licence to take their fences down. Making this process easier is one of five key steps the trusts are calling for, in a letter to new environment secretary Ranil Jayawardena.

As it stands, people releasing beavers face high up-front costs and may be responsible for the management of that wild population for the next five to 10 years. It is another barrier to their full reintroduction.

In Scotland - where beavers have been protected since May 2019 - beaver management is centrally funded. The Beaver Trust wants to see that happen in England too but is nonetheless welcoming of the big step taken today.

“We hope that people learn to live alongside them and see them as part of a British landscape, recognise that they should be here, and that they can help us,” says McCandless.

“But first we really need to help them to kind of get back to the population level that they would have been historically.”

To that end, the protected species status also makes it illegal to damage or destroy a beaver breeding site or resting place such as a burrow, lodge or associated dam.

How do beavers benefit the environment?

As a once-native species, beavers have a right to thrive in Britain. But there’s also no doubt that they offer a lot to humans and the wider environment too. This has earned them the title of ‘ecosystem engineers’.

“During droughts, the wet landscapes they create stand out as green oases because their woody dams hold back water - and in times of high rainfall, they slow down flood waters and improve water quality,” explains Edwards.

With England increasingly vulnerable to drought in summer - especially in the south - and flooding in winter, we urgently need the beavers’ services. Purifying waterways, capturing carbon, and helping thousands of other species grow are high on that list of benefits too.

European countries where beavers are thriving

Out of 218 countries, Britain ranked 189th in terms of the completeness of its biodiversity in a recent landmark assessment.

“We’re one of the most nature-depleted countries on the planet,” says McCandless.

Compared to England and Wales, Scotland is well ahead, however, with around 600 to 1,400 beavers according to recent ScotNature figures. But there’s greater inspiration still to be found in the rest of Europe.

Eurasian beavers were reintroduced in Sweden in the 1920s, and the nation has seen their numbers swell to 150,000. Norway and Germany both reintroduced them in the 1960s, and they now have populations of around 80,000 and 40,000 respectively.

“The population is growing in Britain, but we are generationally behind other countries across Europe in bringing back this animal,” McCandless says.

He acknowledges that beavers aren’t problem free. The rodents’ great gnawing abilities can cause difficulties with infrastructure and on prime agricultural land; so close cooperation with farmers, fisheries, foresters and other parties is needed.

“We would like to see coexistence fostered in the first place and where there's still issues we would use well-established mitigation techniques like tree wrapping to prevent trees being felled, and flow devices to prevent beaver dams creating localised flooding in areas,” he adds.

A mention of licences for ‘lethal control’ in the government guidance has proved controversial. But McCandless doesn’t foresee this being a necessary last resort in the near future. More likely is the need for translocation, trapping and moving a beaver to a more suitable site, if mitigation measures don’t work.

How the UK government is threatening beavers’ revival

The new protections for beavers have been overshadowed by the government’s mini-budget last week, which environmental groups across the UK have denounced as an ‘attack on nature’.

As well as touting 38 new ‘investment zones’ which would see industries encroaching into vital natural areas, Truss’s government could scrap hundreds of environmental regulations with its new ‘Brexit Freedoms Bill’.

“Beavers and other wildlife, such as otters, are protected by the Habitat Regulations, which originated in EU law - all of which are going to be reviewed by the end of 2023,” says Edwards.

“Under the new Bill, there are no guarantees that beavers or other species will keep their protections, and what’s more, with decisions directly under the control of the secretary of state, the usual process of scrutiny by parliament and public consultation will not apply.

“We’re calling on British people to defend nature from the government’s dangerous decision.”