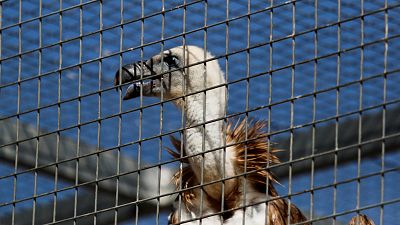 A griffon vulture is seen in an acclimatisation aviary near the village of Korfi, Cyprus.   -   Copyright  REUTERS/Yiannis Kourtoglou
By Euronews  with Reuters  •  Updated: 29/09/2022

Cyprus released griffon vultures into the wild on Wednesday in the latest attempt to boost a once thriving population now critically endangered by poisoning.

The island's largest bird of prey has seen its population fall dramatically in recent decades, either from accidental poisoning or changing farming techniques leaving them short of food.

It is now the smallest in Europe.

What is the biggest threat to vultures in Cyrpus?

They will be joined by eight vultures from Spain, home to Europe's largest population of griffon vultures, which were released on Wednesday in the mountains north of the coastal city of Limassol. They form a group of 15 brought to the island last year, with seven released in mid-September. Another 15 are expected from Spain in November.

In the past decade, Cyprus had also brought griffon vultures from Crete.

"We were only left with eight birds because of the poison baits placed in the countryside mainly to kill foxes and dogs," said Melpo Apostolidou, project coordinator at BirdLife Cyprus, one of the partners in the part EU funded 'Life with Vultures' project.

The birds with names like "Pablo" and "Zenonas" have been fitted with satellite trackers to monitor their movements.

Big, gangly and smelly, Griffon vultures play a vital role as nature's clean-up crew, feeding off dead carcasses and reducing the spread of disease. But the use of banned poisons to kill perceived pests which the scavenging bird will then feed on has a knock-on effect.

"It is a serious problem," he said.

Conservationists say only when the use of poison is effectively addressed can the bird start to thrive again.

"Even if we continue to bring vultures from elsewhere, we are just delaying their extinction if we don't do anything to reduce the frequency of poisoning incidents," Apostolidou said.