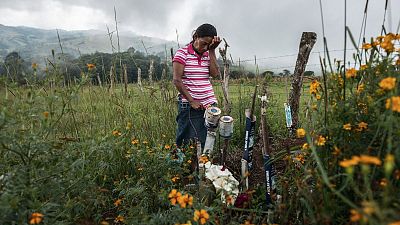 Julia Francisco Martinez, the widow of Indigenous activist and human rights defender Francisco Martinez Marquez who was murdered in 2015.   -   Copyright  Giles Clarke/GlobalWitness
The opinions expressed in this article are those of the author and do not represent in any way the editorial position of Euronews.
By Mary Lawlor  •  Updated: 29/09/2022

Mary Lawlor is the United Nations Special Rapporteur on the situation of human rights defenders.

At least 1,733 land and environmental defenders have been murdered over the last decade. Their killings have been documented in research published by Global Witness today. My heart constricted as I read their names.

On average, one person is killed every two days after trying to protect community land, the environment and our planet from a combination of destructive industry practices, criminal activity, and complicit governments.

Globally, and sometimes even nationally, these killings go unnoticed, and the vast majority are committed with impunity.

Lethal attacks continue to take place in the context of a wider range of retaliation against defenders, who are being targeted by government, business and other non-state actors with violence, intimidation, smear campaigns and criminalisation.

This is happening across every region of the world and in almost every industry sector.

The people losing their lives to protect the environment

Since taking up my role as UN Special Rapporteur on Human Rights Defenders, I have spoken with hundreds of defenders and their families. I have listened to their stories, struggles and successes.

What often strikes me are the ordinary details among their extraordinary examples of commitment to human rights and the protection of our natural world.

Land and environmental defenders - the most at-risk group of human rights defenders - are first and foremost people; they are mothers and fathers concerned for the health of their children as well as journalists and conservationists doing an honest day’s work.

Often, they are Indigenous Peoples, whose expertise are widely recognised as vital for preventing biodiversity loss and ensuring the international community reaches its target of limiting global warming to 1.5 degrees.

Grieving families struggle to get justice

At the heart of many of these stories is a deep injustice with very few families getting their day in court to face the perpetrators who took the lives of their loved ones, or the government and business actors whose actions - or lack thereof - perpetuates or even directly causes attacks.

This is the case for communities in Sierra de Manatlán who have long opposed mining operations that threaten the unique Biosphere Reserve in Mexico – a UNESCO site.

Last year, José Santos Isaac Chávez was brutally murdered. He was an Indigenous activist, lawyer and candidate to the ejidal commissariat of Ayotitlán (a local elected body to manage the Indigenous territories and coordinate actions with communities). He was the only candidate who vocally opposed an open pit mine run for the profit of EU headquartered companies.

There is no indication that the mining company operators have procured the death of any land defender at any time. But there is no denying that the operation is situated within a hotbed of violence, with Indigenous communities sandwiched between illegal mining operations run by criminal gangs.

Decades of local reporting documents disappearances and murders of defenders opposed to the corporate-run mine for which no one has been brought to justice.

10 years on, are environmental defenders any better protected?

As the list grows, I ask myself, what have we learnt since data started being systematically collected on the killings of land and environmental defenders over ten years ago?

Growing awareness amongst politicians and business leaders of the threats that defenders face has led to some progress. States have published human rights guidance for diplomatic missions and some companies have established voluntary corporate policies, with at least 30 businesses developing guidelines on human rights defenders and civic freedoms.

But this is just a wave in an ocean of injustice.

Over 45 per cent of deadly attacks on land and environmental defenders worldwide are linked to extractive industries.

Over 45 per cent of deadly attacks on land and environmental defenders worldwide are linked to extractive industries, according to Global Witness’ data.

Further studies by the Business and Human Rights Resource Centre suggest that around 10 per cent of all documented attacks on human rights defenders can be linked to companies headquartered in the EU.

A lack of transparency is leaving communities in the dark

Companies’ global supply and value chains are unnecessarily opaque and complex, making it hard for communities to know who is accountable for human rights, environmental and climate harms along the corporate chain.

It makes sense then, that more concrete action must be taken by the European Union to prevent corporate abuses. As a major trading bloc with a global footprint, the EU has the responsibility and opportunity to lead the way on corporate accountability.

It is starting by strengthening draft legislation that will require companies operating in the EU and accessing its market to conduct due diligence to identify, prevent and mitigate human rights and environmental risks associated with their activities, and remedy harms that they have caused.

The Corporate Sustainability Due Diligence Directive – if passed - will be the first mandatory regional framework to oblige companies to act sustainably. Crucially, it could also see them held liable in European courts if they fail to comply.

How can the EU better protect land defenders?

As it stands, the published draft does not recognise human rights defenders, including Indigenous defenders, as vital actors with whom companies need to engage continuously.

It currently asks businesses to consult affected communities only ''where relevant''. This legislation must stretch further and guide a business culture that mandates meaningful engagement with impacted and potentially impacted communities and human rights defenders who represent them.

I also see this legislation as an occasion for EU politicians to take heed of the IPCC’s warning of “a brief and rapidly closing window of opportunity” to tackle the climate crisis. Protecting the climate also means protecting defenders.

In these cases, absent or inadequate human rights protections – from safeguarding civic freedoms, tackling high impunity levels and corruption, to oversight over corporate activity – enables a culture of repression and intimidation, and increases the likelihood of attacks.

Extending the Directive to include climate due diligence will ensure businesses transition to sustainable modes of operation, and will help protect defenders.

As EU institutions respond to the Commission’s draft law, they have the power to legislate for change that ripples beyond European borders and empowers human rights defenders globally.

Recognition of defenders and their work within this legislation is vital. It could lead to systematic change and prevent corporate harms and further attacks. Without it, we will continue to see defenders rise up, only to be shadowed by violent attacks and assassination.

View: COP15 is the time to ditch lip service and act on biodiversity