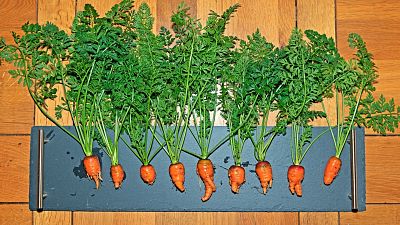 Carrots come in many shapes and sizes, from long and straight to weird and wonky, but consumers are often scared of misshapen veg.

The fact is, if you grow carrots organically, it’s pretty common for the orange vegetable not to be poker straight. And consumer demand for 'perfect' produce is a major contributor to food waste.

So how can we combat our prejudice against 'misshapen' veggies?

Research from Ohio State University in 2021 revealed that shoppers need a bit of persuading when it comes to picking up wonky veg in the supermarket.

How do you persuade people to ‘buy wonky’?

The study found consumers can be very picky when it comes to choosing their carrots. Using hypothetical shopping scenarios, the researchers discovered that participants needed to be told wonky carrots were just as good for them as so-called ‘perfect’ ones.

And not only that, display marketing also needed to inform them that buying ‘ugly’ carrots would help reduce food waste too.

This double-edged approach was found to be the most effective way of driving sales, whereas one message alone wasn’t as effective.

The findings also showed that shoppers would buy mixed bunches - containing straight and crooked carrots - but they needed a discount incentive to do so. They’d only buy them if 60 per cent of the bunch were the usual ‘perfect’ carrot, too.

How much food is wasted because of appearance?

While sales of wonky vegetables have risen in recent years thanks to marketing campaigns like Morrisons in the UK’s 'wonky range', there is still a huge food waste problem in the industry.

A 2018 study by the University of Edinburgh estimated that 50 million tonnes of fresh fruit and vegetables were discarded in Europe every year for cosmetic reasons.

A 2018 study by the University of Edinburgh estimated that 50 million tonnes of fresh fruit and vegetables were discarded in Europe every year for cosmetic reasons.

The power of the supermarkets and their aesthetic standards have been blamed for this wastage. Much of the unwanted produce is ploughed back into fields or sent to landfill.

With climate change likely to usher in hotter weather in coming years, wonky veg may become the norm rather than a choice.

Consumers need to change their perceptions of 'ugly' vegetables

While supermarkets shoulder a lot of the blame for food waste, the views of consumers need to shift too.

Participants in the study expressed consistent dislike for packets containing any ugly carrots, and they also stated that they wanted to pay less for imperfect ones.

Interestingly though, consumers at farmers markets were much more willing to buy less than perfect bunches when they had green leaves attached.

Interestingly though, consumers at farmers markets were much more willing to buy less than perfect carrots when they had green leaves attached.

This may reveal that these shoppers are expecting carrots to look more as if they have come ‘straight out of the ground’ instead of the pre-washed and sometimes even pre-chopped veg found in supermarkets.