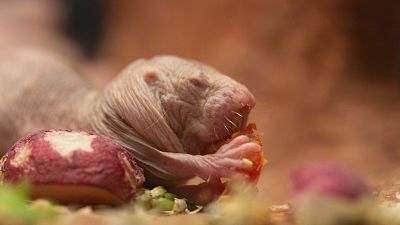 Meet the new face of anti-ageing: the naked mole rat.

These plump, buck-toothed creatures might not be the most aesthetically pleasing animals.

But according to groundbreaking research, the hairless little beasts age healthily, rarely get cancer, and are numb to acid.

Now, Cambridge University scientists are trying to use these insights to better treat human illnesses and inflammatory conditions like arthritis.

“If we can understand why naked mole rats don’t really get these problems, there’s an awful lot to be learned,” he says.

What are naked mole rats?

Their Latin name is Heterocephalus glaber - which translates as 'different headed bald thing'.

The creatures - the only known cold-blooded mammals in the world - make a tweeting sound like a bird and dig with their teeth.

Like bees and termites, they live in large colonies dominated by a single breeding female. Around 80 mole rats can live together in these underground burrows.

Their unusual habitat may explain their immunity to acid, Smith explains.

“Our research identified a genetic variation in naked mole-rats that means acid acts like an anaesthetic to their nerves,” he says.

“We think it’s because in the wild, these animals live in large colonies underground where their exhaled carbon-dioxide builds up and reacts with moisture to make carbonic acid.

“This caused them to evolve so that acid doesn’t cause them pain and they can stay safe in their burrows.”

Why don’t naked mole rats age or get cancer?

Common brown rats live for roughly two years. Mole rats are a similar size and shape - yet they can live more than three decades.

The oldest known mole rat died at the venerable age of 39.

The animals don’t just live a long time - they keep their looks, too. It’s hard for researchers to tell a three-year-old and 30-year-old rat apart.

“I had flashes of grey in my hair and wrinkles in my face, but the mole-rat looked great!”

They age ‘healthily,’ and usually die when another animal kills them in a fight, not from getting sick.

Mole rats don’t seem to get cancer, either - just a few cases have ever been detected. Other small animals like mice are even more susceptible to cancer than humans.

The research team predicts that mutations in naked mole-rat DNA might occur at a slower rate than mouse and human DNA. This could have implications for human medical treatment.

“Once we understand more, we can transfer that knowledge across to helping companion animals or humans with problems such as inflammatory pain, arthritis and cancer,” says Smith.

How automotive batteries are being turned into solar power storage