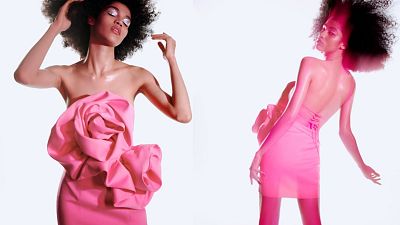 Screenshot from the Zara Lanzatech partnership website.   -   Copyright  Zara x Lanzatech
The opinions expressed in this article are those of the author and do not represent in any way the editorial position of Euronews.
By Frankie Leach  •  Updated: 26/06/2022

Rather than addressing this crisis of overconsumption, by limiting how much they produce and encouraging shoppers to buy fewer items, Zara is simply using the guise of sustainability to shift more products and protect the guilty conscience of their consumers.

It follows the December 2021 launch of a limited-edition capsule collection, which was the first clothing line to use LanzaTech's technology to turn carbon emissions into fabric, instead of manufacturing items from virgin fossil resources.

Zara claims that capturing and repurposing carbon emissions from industrial processes limits the direct release of these emissions into the atmosphere and helps limit the use of virgin fossil resources. However, the brand has previously come under fire for its role in the fast fashion industry, fuelling a culture of overproduction and the ‘buy to wear once mentality’.

As they released this new groundbreaking collection in 2021, Zara’s owner Inditex reported that net profits had doubled to €3.2 billion.

So how do you turn carbon emissions into clothes?

According to a recent report, LanzaTech's technology captures CO2 from industrial, agricultural, or domestic waste processes. Through a fermentation process, it is transformed into ethanol, a fundamental component in producing materials like PET used in a polyester thread.

The organisation's partnership with Inditex has seen it capture steel mill emissions, that would otherwise be emitted into the atmosphere, and then recycle the captured emissions into Lanzanol (ethanol) through a fermentation process. The Lanzanol is then converted into low carbon mono ethylene glycol (MEG) by the company India Glycols Limited, which is then converted into low carbon polyester yarn used by Zara.

However, the resulting textiles are not made from 100 per cent captured carbon.

The MEG provided by Lanzatech makes up 20 per cent of the final polyester with the remaining 80 per cent coming from Purified Terephthalic Acid (PTA).

So, is this latest venture truly a step in the right direction for the fashion industry in its goal to reduce emissions? Or is it an advanced form of greenwashing, concealing a global crisis of overproduction and overconsumption?

Is the collection just greenwashing?

Processes like this are notoriously expensive and on the surface, it might seem like a worthy cause, but often these elaborate schemes are essentially covering up a much wider issue across the industry.

Put simply, brands like Zara are responsible for perpetuating a culture that encourages people to consume as much clothing as possible, allowing them to continue producing tonnes of clothing every day which likely will end up in a landfill with an extremely short lifecycle.

This isn’t to say that LanzaTech’s work isn’t commendable, but it is by no means a reason to let Zara off the hook for the devastating environmental impacts their production and sales models have on the world.

In March 2022, Inditex FY21 revenues grew 36 per cent to €27.7bn - the brand’s profits are rocketing and based on the fact this is down to selling more clothes, it seems a drop in the ocean to suggest just a single line of Zara’s entire output was made partly from recycled carbon emissions.

The so-called solution is an expensive and energy-intensive sticking plaster over a global issue – a sure-fire way to divert money and political attention from the real, bold changes we need.

Orsola de Castro, co-founder and creative director of Fashion Revolution, believes that a brand needs to address the root causes of its impact, not just its effects… “increased quality of life for supply chain workers, and a decrease in over-production for its customers.

All else is not to be seen as a step in the right direction, but as a way to confuse well-meaning customers, also known as greenwashing,” she says.

For Wise, the idea of using technology to take carbon out of the air may sound like an attractive and sensible solution to our escalating climate crisis but in reality, carbon capture use and storage is at best greenwashing, due to the fossil fuels and carbon emitting processes in the first place.

“The so-called solution is an expensive and energy-intensive sticking plaster over a global issue – prevention not cure and a sure-fire way to divert money and political attention from the real, bold changes we need.”

The carbon emitting processes we ignore

In terms of the project’s overall feasibility and effectiveness, Wise notes that “carbon can only be captured at the energy generation stage and doesn’t take into account any of the logistics involved in industries such as fashion.

“Any carbon emitted through sea or air transportation of materials and products cannot be captured and will therefore continue to be released into the atmosphere as emissions,” he adds.

What’s more, greenwashing can often be used as a cover in the fashion industry for more sinister and unethical practices such as modern slavery and other human rights abuses across supply chains.

De Castro says that without an ethical production process, any attempts at sustainability are futile. “Unless all supply chain workers are paid a dignified living wage, and unless fast fashion brands such as Zara commit to producing adequately instead of excessively, everything else is a plaster on a seeping wound,” she says.

Companies in the industry clearly recognise the growing movement within the industry to reduce emissions, but initiatives like this just give cover to shoppers to continue buying and wasting more.

Rather than addressing this crisis of overconsumption, by limiting how much they produce and encouraging shoppers to buy fewer items, Zara is simply using the guise of sustainability to shift more products and protect the guilty conscience of their consumers.

View: We should be counting carbon on menus, not calories

View: Golf has grown into an ‘ecological villain’

View: Billions of euros in aid are being rerouted into climate finance