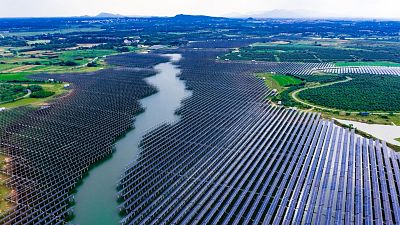 Solar energy is the future.   -   Copyright  yangna/Getty Images
The opinions expressed in this article are those of the author and do not represent in any way the editorial position of Euronews.
By Harald Överholm  •  Updated: 11/05/2022

Dr Harald Överholm is the founder and CEO of Alight, one of the EU’s leading corporate solar providers. He is also a former member of the International Energy Agency’s PVPS workgroup on solar business models. Here he gives us his take on why he thinks solar is the best renewable source of power we have at our disposal.

It is clear that the energy transition is underway and moving at a positive trajectory.

Our future will be driven forward by an almost 100 per cent mix of solar and wind energy coupled with battery storage - with rapid further electrification of transport and heating too.

I can confidently say that this vision is perfectly feasible within the next decade. And what’s more, this future will have a very low CO2 footprint and usher in a new era of energy security and independence.

One thing that is important to point out is that short-term compromises need to be accepted in order to achieve this long-term vision and endpoint.

Nuclear and hydrogen are important - but not the best options

For one, we should retain existing nuclear plants until they are no longer necessary, but let’s also not allow the nuclear industry to have the power source relabelled as renewable, resilient or green, it’s not - so let’s not fool ourselves.

Nuclear bears environmental and safety risks and encourages a dangerous reliance on a handful of centralised power plants. A further nuclear build-out would be a distraction insofar as it would suck in resources required to build our renewables-based future, while not providing a reliable way of generating more power within any relevant timeframe.

A similar distraction is hydrogen. It will play a niche role in coming years, such as in the production of fertiliser, and complex industrial processes, but we must not mistake hydrogen for a viable mass-power alternative.

Hydrogen has received an excessive amount of attention - disproportionate to the benefits it has produced to date, or could do in future - and it also carries the risk of enabling oil and gas companies to continue business as usual, via hydrogen production from gas.

To be clear, oil and gas companies have a role to play in the energy transition, but it should not involve the continued reliance on fossil fuels.

Instead, the funding, development and scaling of renewables such as solar and wind energy, and battery storage should be prioritised.

The truth about solar energy

Now, let’s compare this with solar - parks are being built across the globe right now, people are installing residential systems at a remarkable rate, using tried, tested and safe technology.

All of which is cheap, scalable, and reliable.

The truth is, solar carries little to no environmental downsides or risks and enjoys massive political support across the world. Just the other week, the UK government said it wanted to boost solar capacity fivefold by 2035, up from 14 GW today.

This is why we should rely on solar the most for the future of power generation.

The amount of energy that hits the earth from the sun is 10,000 times higher than we need for all our power demands - and requires less than 1% of the Sahara to capture it.

Solar power’s energy source - the sun - is the most powerful and vast one we have. The amount of energy that hits the earth from the sun is 10,000 times higher than we need for all our power demands and requires less than 1 per cent of the Sahara to capture it.

We are blessed in Europe to have acres of untapped land for solar developments that we could begin utilising tomorrow if we have the conviction to do so, scaling solar at speed in parallel to wind energy.

The solar industry has worked hard to build an enhanced awareness of the environment in which solar parks are located. It is now widely expected that operators conduct an investigation of what plants and animals exist on a site, before creating a tailored plan that ensures this biodiversity increases.

It is commonplace to have ambitious biodiversity plans that include measures such as planting meadow flowers for pollinating insects, having sheep grazing as part of vegetation management, creating roosting spaces for bats, planting hedges and tree lines beyond required fencing, and preserving wildlife corridors.

Yet even then, some would rather suitable land be left to sit, rather than power their homes, businesses, and the continent, through a free and vast energy source in the sun.

We have to reach a point where, collectively, we accept that having some land host solar panels and wind farms is better than the alternative.

Only a handful of relatively simple policy actions are needed to make solar accelerate across Europe:

Such measures, coupled with a willingness to utilise just a fraction of our land for solar, would enable Europe to make solar a reliable cornerstone of our power system within the next decade.

Tackling the root of emissions

Companies like Alight build out solar power with no subsidies required at all, through industrial solar installations underpinned by 10 to 20-year power purchase agreements (PPAs).

This delivers long-term cost savings to business customers by providing solar power as a service without the need to invest capital. It maintains the infrastructure, that delivers the power that is subsequently purchased per kilowatt-hour by customers through a long-term PPA - which shields them from price surges while drastically reducing their emissions from fossil power sources.

No wonder then, given the clear advantages to be had, that solar arrays at European businesses are set to jump by about 15 per cent in Europe this year compared to 2021, according to data from BloombergNEF.

We have still barely even scratched the surface of solar’s true potential to revolutionise the global power system.

This is at a time when we have still barely even scratched the surface of solar’s true potential to revolutionise the global power system through its quick, cheap and infinite modular deployment.

Battery storage systems are the next frontier in this roll-out, increasingly co-located with solar power production to give us the means through which to store the sun’s rays for flexible usage.

By embracing the potential of solar, and committing to its long-term viability, we will be on a path to a 100 per cent renewable world.