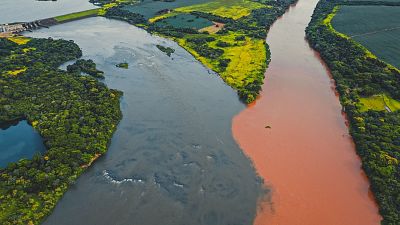 The Amazon Rainforest is being severely impacted by deforestation.   -   Copyright  Canva
By Eve Hebron  •  Updated: 13/04/2022

On Monday (April 11), a ‘people-powered’ campaign launched a brand-new film, aiming to raise awareness about savers' pensions - and the surprising way they can help fight the climate crisis.

The movement, Make My Money Matter, was founded by UK film director Richard Curtis in partnership with Jo Corbett, a former special advisor to the government.

The new campaign, #DeliverTheTruth, features a short film directed by Curtis - usually known for directing rom-coms such as 'Love Actually'. He hopes to fight the companies responsible for driving “deforestation, damaging the environment, and threatening lives and livelihoods across the planet.”

Earlier this year, the campaign reported that £2 (€2.40) in every £10 (€12.01) of an average British pension is linked to the destruction of forest areas across the globe, often to make way for activities such as mining or urbanisation.

Who does the money go to?

The report disclosed that over £300bn (€360bn) of UK pension fund investments are in companies and financial institutions with high deforestation risk.

Companies with links to agriculture and food promote the chopping down of thousands of hectares of forest to provide land to farm cattle, manufacture palm or grow cocoa. According to the campaign, this industry is responsible for 73 per cent of deforestation worldwide.

Infrastructure companies are also criticised for clearing entire forests to make space for their construction. Oil and gas, as well as mining companies, also massively contribute to deforestation due to their supply chains.

The data collected within the report points the finger at sectors such as manufacturing, retail, and banks and insurers too, and condemns the industries indirectly causing deforestation. It also faults tobacco, infrastructure and real estate for directly causing the issue.

Who is being impacted?

While deforestation negatively impacts the environment, the study also mentioned the displacement of Indigenous peoples and local communities as a result of the human-driven destruction of forest areas. According to Global Witness data shared by Make My Money Matter, 2020 saw 227 lethal attacks upon people defending their homes, land and livelihoods.

The campaign also highlights the staggering impact deforestation has on biodiversity.

One of the most biodiverse places on earth, the Amazon Rainforest, is often targeted by companies aiming to make money from its resources, says the campaign. In January 2022, an area four times the size of Liverpool was believed to have been lost to such sectors, says the BBC.

While deforestation is fuelling an environmental and social crisis, the campaign says it is also threatening savers’ ability to retire comfortably.

What does the new film and the #DeliverTheTruth campaign hope to do?

Having exposed the little-known link between UK pensions and deforestation, the campaign’s latest film hopes to emphasise the shock and surprise individuals experience upon discovering the truth behind their money.

One of the key aims of the new campaign is to encourage company pension schemes to adopt sustainable and environmentally-friendly investments, and to be more transparent with people.

“We’re calling for people to sign our petition to cut deforestation from our pensions and make sure our money isn’t unknowingly helping to destroy the planet,” says Izzy Howden, a campaigner and strategic consultant at Make My Money Matter.

“We really want to get people thinking about where their money is invested, and to help them take action to make sure it’s not being used in ways that don’t align with their values,” she adds.

The video hopes to influence people to take action, so that their money stops contributing toward environmental destruction.

A post shared by Make My Money Matter (@mmmoneymatter_)

What can people do now?

“In the short term our money is contradicting our values,” says Curtis. “In the long term, it’s undermining the very futures we’re meant to be saving for.”

Make Money Matter says that it’s unlikely an employer will know the impact your company pension has, or how much it’s worth to you.

By asking your employer where your company’s pension money is invested however, you’re raising awareness regarding the impact pensions can have. You can also sign the campaign’s petition, calling for all pension providers to commit to going deforestation free.

According to Make Money Matter, ‘greening’ your pension is 21 times more powerful at cutting down your carbon footprint than the combination of going vegetarian, flying, and switching your energy provider.

The public has this huge weapon in their armoury when fighting for the planet,” adds Curtis, “the trillions of pounds in their pensions. Now is the time to use it.”