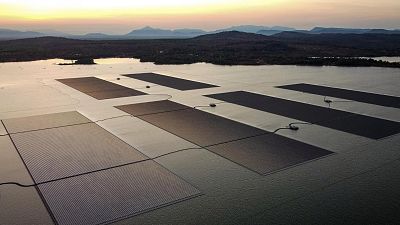 In Thailand’s northeastern province of Ubon Ratchathani, a reservoir has been transformed into a shimmering network of solar panels - capable of reducing the kingdom’s carbon emissions by 47,000 tonnes every year.

Touted as the "world's largest floating hydro-solar farm”, the Sirindhorn dam project is capable of creating solar power by day and hydropower by night.

The 720,000 square metre installation is the first of 15 farms Thailand plans to build as part of its ongoing commitment to reach carbon neutrality by the year 2050.

"This is the first and biggest project like this in the world," says Prasertsak Cherngchawano, Thailand’s deputy governor of electricity.

“There are 144,000 solar panels here. One panel is two square metres, and the whole farm is equivalent to 70 football fields."

The Southeast Asian country is stepping up efforts to wean itself off fossil fuels after Prime Minister Prayut Chan-O-Cha committed to achieving net-zero greenhouse gas emissions by the year 2065.

Alongside other world leaders at COP26 in Glasgow, Chan-O-Cha stated his intention to “ramp up measures in tackling climate change in any way imaginable.”

Hitting these ambitious targets will require a major revamp of Thailand’s power industry.

The nation is still heavily reliant on fossil fuel, with 55 per cent of its energy derived from natural gas as of October 2021. This contrasts sharply with just 11 per cent stemming from renewables and hydropower, according to the Energy Policy and Planning Office (EGAT).

EGAT plans to produce 2,725 megawatts of power from floating hydro-solar farms by the year 2037 - over 30 per cent of the nation’s annual power needs.

But as the kingdom’s green revolution gets underway, many people are sceptical of the scheme.

Locals have also expressed concern, claiming the farm has forced them out of areas traditionally used for livelihood.

"The number of fish I can catch has reduced, so we have less income," says Thongphon Mobmai, a local fisherman from the region.

"We also have to travel longer routes when we're out fishing and we can only drive our boats in areas designated by the authorities. These are the problems we have with the solar farm.”

Despite this, the electricity generating authority insists the project will not affect agriculture, fishing or other community activities.

"We've used only 0.2 to 0.3 per cent of the dam's surface area. People can make use of lands for agriculture, residency and other purposes," says Cherngchawano.

As well as generating power, officials hope the giant farm will also prove a draw for tourists. A 415-metre long ‘Nature Walkway’ has now been installed beside the dam, providing panoramic views of the reservoir and its floating solar cells.

Watch the video above to see the floating solar farm for yourself.